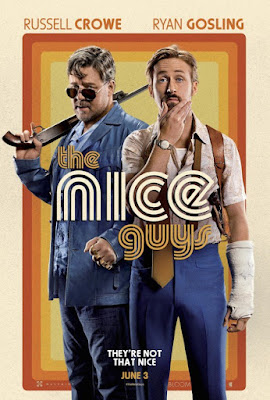 Shane Black, the testosterone-addled writer/director behind such guys with guns films as Lethal Weapon, Kiss Kiss Bang Bang, and The Last Boy Scout, isn't wholly to blame for this embalmed-in-nostalgia disaster. It's clear he didn't get the memo. No one who has read the memo would have cast Russell Crowe in anything remotely resembling a comedy. I'm positive a memo was sent out to everyone in Hollywood letting them know that Crowe can't do funny in the same way that Donald Trump can't do rational. The proof is the romantic-comedy A Good Year (2006), in which Russ tried to go the full Hugh Grant and ended up doing a career face-plant that registered on the Richter scale. And I`m positive another memo will shortly be doing the rounds in Hollywood letting people know that Ryan Gosling also appears to be comedy-impaired.

The plot, such as it is, has Crowe and Gosling as, respectively, Jackson Healey,an enforcer for hire, and Holland March, a boozy P.I., joining forces to find a missing girl in 1977 Los Angeles. Also along for the ride is Angourie Rice playing March's precocious 13 year-old daughter. The missing girl, Elaine, is somehow involved in both the porn business and a scandal affecting Detroit's automakers. Various people want her dead and are happy to take out anyone looking for her. As you can see, Black repeatedly hit the cliche key on his laptop when he sat down to write this mess. The thin plot is just a rickety framework for a barrage of dead-on-arrival gags and glitzy, extravagant production design that recreates in lurid detail the era that good taste forgot.

Even if Crowe and Gosling were born comics it's hard to imagine them wringing laughs out of this material. A typical gag has March asking Healey, "What do you call those guys without balls?" March is thinking of eunuchs, but Healey wittily replies, "Married?" This would have been a tired gag in 1977, but Black thinks it's so funny he has his duo do another variation of it later on. Adding a precocious kid into the mix just makes things more like a bad sitcom, and when the girl ends up at a porn producer's party the film takes a turn into the unsavory that it never recovers from. None of the actors survive this train wreck. Gosling and Crowe are poor, Rice is awful, and Kim Basinger as an attorney general is...very odd. When she first appeared on screen I wasn't sure what I was looking at. A Pixar creation? A hologram? And then I remembered that some actors now have it in their contracts that they must be digitally altered to look younger. Basinger doesn't look younger, she looks like a replicant auditioning for a Blade Runner sequel.

Shane Black clearly set out to make a guns and gags version of Boogie Nights. The latter film, however, wasn't fixated on period detail and had a laser-sharp focus on character. The Nice Guys is just a collection of bad jokes dressed up in wide lapels and garish colours. And even the action elements are lacking, which is a shocker in a Shane Black film. Avoid this one and just watch something nasty and funny that was actually made in the '70s like Freebie and the Bean or Busting.
Posted by Cary Watson at 5:23 PM