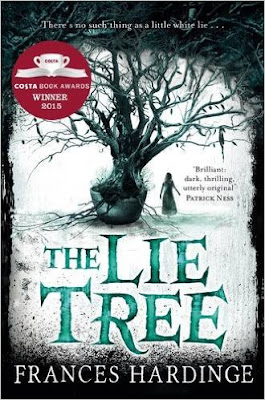 Part of my job at the Toronto Public Library involves selecting books for shut-ins, a few of whom are teenagers. This means I regularly spend time combing through dozens of thumbnail descriptions of young adult novels. That translates into a lot of stories about dystopias, mental illness, broken homes, and the paranormal. Most YA novels are written for girls, and one trope that seems to be common to many of them is that girls can and should kick ass, metaphorically and, in the case of dystopian and paranormal lit, literally. In short, there's  a strong and healthy feminist streak running through contemporary YA writing.

Frances Hardinge's novels have all featured underage heroines who get things done through grit, bravery and smarts. So far, so normal. What sets Hardinge apart (far apart) from others in her field is her rich, inventive prose, and you can read my gushing praise of her writing here and here. In The Lie Tree she tries something a bit different. Whereas her previous novels were firmly and fully in the fantasy wing of the YA building, this one has is more grounded in reality. But not entirely.

The story mixes together archeology,  the debate over Darwin's theory of evolution,  and a murder mystery in a late-Victorian setting. The heroine is Faith Sunderly, the teenage daughter of  Erasmus Sunderly, a reverend with who has lost his faith and replaced it with a mad passion for archeology. On a trip to Asia he acquired the eponymous plant, which grows when it's told lies, and produces a fruit, when eaten, that reveals secrets. This is the most fantastical part of the story, but the tree exists more on a symbolic level than as part of a fantasy world. Faith's father is murdered (it looks like a suicide) and she must investigate the crime.

The plot synopsis makes it sound just another example of YA historical fiction in which a plucky heroine proves that the "fairer" sex is no to be taken lightly. Hardinge goes beyond all that by giving her novel a psychological depth that's missing from almost YA titles of this type. Her focus is on the sheer mental torture suffered by women who have wit, talent, intelligence and ambition, but are denied the chance to use their skills at every turn. Faith isn't the only woman caught in the webs of Victorian social strictures. Her mother must play the coquette to acquire a new husband after the death of Erasmus.Faith is initially shocked at this, but by the end of the novel realizes that her mother is doing the best for herself and her family given the limited arsenal she has to work with. Without an income to fall back on, a middle-classwoman must be wed. The fantasy elements are deftly handled, but what makes this book stand out (and covered Hardinge's mantelpiece with awards) is its examination of the psychological toll exacted on people who are denied basic rights by virtue of their gender. And on that basis The Lie Tree also carries a lot of contemporary resonance.
Posted by Cary Watson at 2:59 PM