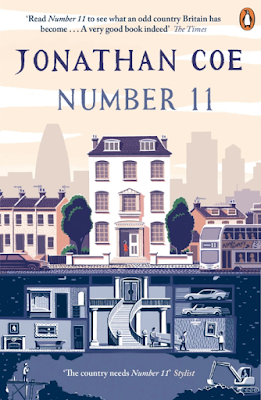 There's a Christmas hamper quality to Jonathan Coe's writing--a really superior Christmas hamper, the kind Fortnum & Mason's sells, or the ones Billy Bunter lusted after. In both Number 11 and its prequel, The Winshaw Legacy, or What a Carve Up! (1994), Coe artfully and fluently combines multiple plot lines, a score of characters, elements of tragedy, farce, comedy, social commentary, and a touch of the the polemical. And in Number 11 Coe does all this while also slipping from one literary genre to another without, as it were, grinding the gears. This novel begins with a subtle pastiche of an Enid Blyton-ish story, then adds an epistolary quest tale, a Holmesian mystery, and ends with something that smacks of Dr Who. As a purely literary experience, Number 11 is almost overstuffed with pleasures.

Rachel and Alison are the central characters, and we meet them at age ten when they're staying with Rachel's grandparents while their mothers are on holiday together. The pair aren't really friends at this point, but after an Adventure with a Mysterious Stranger, the two form a bond that lasts, with some major detours, into adulthood. From this point on the narrative resembles a Venn diagram. The centre circle contains a set of Winshaws, a family of media barons, industrialists, and politicians who define themselves by how savagely they can remake Britain into their own avaricious, graceless, cruel and wanton image. The Winshaws were at the centre of the previous novel, but here it's their influence that's being felt--it's now the Winshaws' Britain, and everyone else is trying to eke out a living in it.

Coe uses his wide cast of characters to give us micro and macro views of what modern Britain has become. There's a failed singer who's lured into a dreadful reality show; an Oxford professor whose husband meets with what could be called death by nostalgia; an insufferably wealthy trophy wife whose architectural ambitions lead to disaster; a Katie Hopkins-like columnist who fabricates a story that sends a woman to jail; and a range of more minor characters who all have their role to play in illustrating the decline and fall of the social welfare state.

Although Coe has a lot to say about the state of the UK, Number 11 is not an editorial or opinion piece dressed up in literary finery. His writing is witty, psychologically acute, elegant, and he's not too proud to throw in the broadest of jokes occasionally. Coe is also acutely aware that his kind of comic writing does little or nothing to influence the political climate. In a section of the novel dealing with the murder of some stand-up comedians, he even argues that political satire can actually be counter-productive since it provides the illusion of lively opposition to people like the Winshaws. Another idea explored in the novel is that the speed and variety of modern communication is a poisoned chalice. A simple typo on SnapChat breaks up a friendship, and the cynical editing of a TV show almost ruins a woman's life. But Coe is not a Luddite. A sub-plot detailing a man's search for a lost film that he saw as a child in the 1960s is a warning that retreating into rosy memories of the past is not a healthy option.

The only problem with Coe's fiction is that it doesn't move at the speed of politics. The Winshaw Legacy seemed outrageous until Tony Blair and David Cameron came along, and Number 11, which was published less than a year ago, would undoubtedly be a much different novel if it had been written in a post-Brexit vote world. Fortunately, that means we're almost certain to get a third novel in this series, one in which Coe shows how the vulturous Winshaws plan and profit from Brexit. I look forward to it already. I even have a possible title: Wrexit.
Posted by Cary Watson at 9:24 AM

Watching that certainly will not be an entirely light exercise.