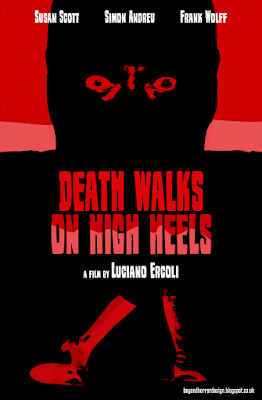 You simply can't beat a giallo film for tawdry entertainment value. Gialli were one of the staples of Italian cinema from the late 1960s to the mid '70s, offering a lurid mix of violence, sadism, voyeurism, sex, and deeply twisted plots. They were what Alfred Hitchcock might have made had he let his freak flag fly. In Italian, giallo means yellow, and the films were given this name as a reference to a publisher who reprinted English mystery/thriller novels with distinctive yellow covers. The films themselves owe a big debt to Hitchcock, Psycho in particular. Many of the films feature heavily disguised killers who attack beautiful women (always with bladed instruments) for a variety of warped or mercenary reasons.

Exploitation elements aside, gialli deserve appreciation for their cinematic qualities and enthusiastic attempts to befuddle the audience with devious plots. These were low to middling budget films, but they certainly tried to put on a good visual show. The interiors and women's fashions in gialli are usually the epitome of '70s style, which is both good and bad, but always eye-catching and/or eye-watering. The musical soundtracks are a mix of the weird and the overblown, and even a big name like Ennio Morricone did work on some gialli. What really keeps these films worth watching are the plots. The producers couldn't invest much money in stars or stunts, but they certainly urged the scriptwriters give it their all. The mystery at the centre of each giallo may be highly improbable, but the plotting is often surprisingly clever and keeps the audience on board, which is crucial since gialli also suffer from some pronounced defects.
,
You don't watch these films for the acting. Or the dialogue. Some performances are respectable, the remainder range from wooden to overwrought. Interestingly, it's usually the women who give the better performances. The men often seem more interested in modeling their turtleneck sweaters (a fashion staple in gialli) than doing any actual acting.

So the reason for this post is that I recently got a Roku attachment to my TV, which means I can stream films from YouTube onto the big screen, and the first thing I did was have a giallo film festival with myself as the guest of honour. Herewith are some of the better ones I've seen.

Did I mention that gialli often have ludicrous titles? This one starts out as a standard story of a beautiful woman pursued by a masked madman, but then gets progressively more complicated and surprising. When the mystery is finally unraveled you'll be applauding the scriptwriter for his amazingly intricate and logical, if  bizarre, plotting. The acting here is mostly over the top, at times leading to unintended laughter, but everyone attacks their roles with gusto, especially the actor who utters the immortal line, "Porco!" when confronted with a transvestite.

The young daughter of a sculptor living in Venice is murdered and he tracks down her killer. The plot isn't much to speak of, but the location photography is stunning. The director, Aldo Lado, was from Venice and he clearly knew all the best locations for capturing the spooky oddness of the city. I can't help wondering if this film somehow inspired or influenced Nicolas Roeg's Don't Look Now which came out a year later.

Another Byzantine plot from the director of Death Walks on High Heels. This time a fashion model witnesses a murder in the building across from her apartment but can't prove that it actually happened. There are some plot holes in this one, but it's still very intriguing and the look of the film is '70s to the max. A sidenote: based on all the gialli I've seen, 80% of the Italian female population at this time were models with the remainder strippers and/or homicidal maniacs.

If you're going to dive into the giallo genre you have to see at least one starring the gorgeous Edwige Fenech. Fenech is to Italian B-movies of the '70s what the Virgin Mary is to Catholicism. She starred in gialli, cop movies, horror films, and lots and lots of sex comedies. In Iris she wears a variety of improbable outifts, including body paint, and spends the rest of the time forgetting to lock her windows and doors, thus allowing maniacs access to her at all hours of the day and night.

This is the outlier in the giallo genre. It begins like many gialli, with a beautiful woman facing a seemingly impossible puzzle: she appears to be missing two days from her life. It's soon clear that this isn't any kind of exploitation film. Florinda Bolkan plays the lead character and she's a superb actress. More importantly, the cinematographer is Vittorio Storaro, the genius behind the camera on films such as Last Tango in Paris, Apocalypse Now, and Woody Allen's latest, Cafe Society. The look of the film is amazing, and the story is an elegant, mysterious, subtle attempt to visualize a kind of waking dream. There's no big pay-off to the film, but it's a crime that it's not more widely known or available on DVD. Are you listening, Criterion Collection?
Posted by Cary Watson at 12:01 AM

Awww its full of entertainment. I first time read such exciting article.Good work.Your writing skills are note-worthy in it.Thank you very much for posting good stuff.