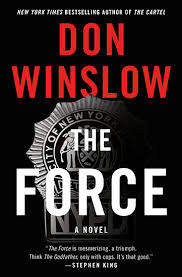 Don Winslow's The Cartel (my review) was one of the best books I read in 2015. The Force is probably the worst I'll read this year. But it's a real page-turner if you like a fast-paced literary train wreck. I guess I stand guilty of hate-reading. The clue to why this novel is such a fall from grace is found in the author's acknowledgments at the end of the book. He thanks Ridley Scott and Twentieth-Century Fox for their interest in the manuscript and their purchase of the film rights "after our successful collaboration on The Cartel." There's the problem. The Force isn't a novel, it's a bloated, bombastic, nonsensical screenplay about crooked cops, ruthless crims and corrupt politicians. I'm guessing Winslow had both eyes on the future film as he wrote this and it completely ruined his work.

Denny Malone is the main character, a rock star detective working Manhattan North, making big busts with his four-man team. My money's on Tom Hardy to play him in the movie. Denny and his men are tarnished angels; they keep the streets clean but they also take bribes, kickbacks, and freebies. When they bust a drug dealer named Pena (Denny also executes him), they nab millions in cash and 50 kilos of high grade heroin. They see the loot as a retirement fund and college educations for their kids. They justify this kind of larceny because, well, everyone else does it and don't they deserve something for putting their lives on the line all the time? This crime proves to be Malone's undoing. In short order he's being targeted by Dominican gangsters, a Harlem drug lord, the Mafia, Internal Affairs, a federal task force,  and some fellow cops. The Girl Guides also want him for skimming their cookie sales. Okay, it's a cheap joke, but that's the sort of response the novel demands. The plot gets progressively sillier until it climaxes with a city-wide race riot. But wait, there's more! Winslow dips into the lazy writer's toolbox and comes up with this old chestnut--a drawing room denouement! The meet is in a billionaire property developer's penthouse, and the guests include the mayor, the police commissioner, the billionaire, the DA, Malone, and Hercule Poirot various other top cops. Why are they there? So Malone can secretly record their incriminating conversations, of course. You've seen this trick in a hundred badly-plotted movies so be prepared to see it for the 101st time next year when the film comes out. And how could I forget Denny's schmaltzy redemption scene at the finale? Or the tedious info dumps that clog the first quarter of the novel? And of course there are all those superfluous scenes of our cop anti-heroes carousing and speaking fluent Toxic Masculinese.

Denny and his peers are a thinly drawn bunch who exist as amalgams of every macho cop cliche that's been around since Bullit. Denny even has a boss who tells him he won't put up with his team breaking the rules! And this is where a central problem with the novel becomes apparent: Winslow's imagination and inspiration are rooted in cop films from the 1970s. Most of the key characters are under the age of forty, but Winslow, who's in his early sixties, can't seem to bridge the generational divide. His characters sound and act out of time. He makes an awkward attempt to get with the times by having Denny love rap music, but it doesn't wash when he also has a woman sporting a "Veronica Lake-style hairdo" and a couple of other characters enjoying jazz music. Jazz? Jazz lovers are on the endangered species list and are kept in a special enclosure just outside New Orleans.

The novel's only apparent purpose or theme is to show that policing in New York is corrupt from top to bottom, not to mention racist and brutal. This was all said as long ago as 1972 in Across 110th Street with Yaphet Kotto and Anthony Quinn. And is this true of contemporary New York? N.Y.C. is statistically one of the safest big cities in America, but in Winslow's view it's a hellhole. Just imagine if he'd set his novel in Baltimore or Chicago. At a couple of points I thought the novel was going to make the link between the "War on Drugs" and the biblical levels of corruption, but it gets lost in a sea of turgid bromance, shouty and tone-deaf dialogue, and a romantic sub-plot between Denny and his black girlfriend that's only in place to assure us that, no, Denny isn't really racist. And Claudette, the girlfriend, gets to toss off a speech or two on race relations that would fit snugly on the Opinions page of the New York Times.

Speaking of girlfriends, in The Cartel Winslow's only real misstep was reflexively describing female characters in terms of their sexual desirability. He's worse here. Virtually every woman in the novel is some degree of "hottie." The nadir is reached when an irrelevant restaurant hostess is described as being "beyond beautiful." Beyond? Is she an immortal?

Like last year's film The Nice Guys with Russell Crowe and Ryan Gosling, The Force is a pained and clumsy exercise in '70s nostalgia. I'd even say he's poached bits and pieces from various '70s cop films. I keep comparing The Force to various films because as I said at the beginning it's not really a novel. It's a film treatment that needs to be pruned down, sharpened and given several coats of polish by a phalanx of script doctors. And that's probably exactly what will happen to it before it hits the local multiplex. By all means read The Cartel, which is a fantastic novel, but give this a pass and hope that the film version bombs so that Winslow can go back to writing novels. And if you want a fix of urban blight and crime, read Ghettoside: a True Story of  Murder in America (2015) by Jill Leovy. It's a brilliant ground-level study of what the War on Drugs has done to African Americans in Los Angeles.

The book may be crap... but the review is solid gold!

Enjoyed your review. Like you, I thought The Cartel was terrific and the preachiness I objected to in The Force actually worked in the The Cartel. There was less of it for one thing, and Americans do continue to act as if we have no responsibility for the carnage to the south. Good work!