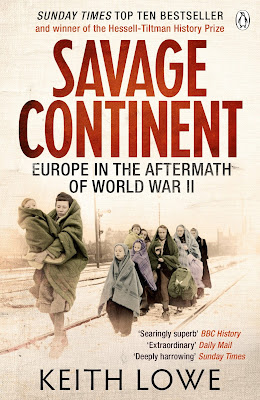 You would think by this point historians would have picked clean the carcass of the Second World War; every nook and cranny of the conflict, all it's minor and major characters have been the subject of histories or biographies. Case closed, right? Savage Continent proves otherwise. This history examines, in a brisk and brilliant manner, what happened in Europe after the end of hostilities, and reveals that vicious and bloody conflicts continued until about 1950.

The war ended at different times in different places. The Allies, for example, liberated southern Italy in 1943, and what became immediately apparent there (and would be true throughout Europe) was that once the Allied and Axis armies left the scene, the resulting military and political vacuum was rapidly filled with micro-conflicts. These ranged from peasants seizing vacant land in Italy to bloody ethnic cleansing in Poland and Yugoslavia. Tens, perhaps hundreds, of thousands of people died in these forgotten episodes, and many millions were displaced and driven from their homes and countries. Lowe shows that the end of the war often worked as an accelerant on long-standing hatreds and rivalries between political, ethnic and religious groups. The war had shown the utility of violence and pogroms, so in the chaos of the immediate aftermath of the war, when law and order and government had gone missing, something akin to mob rule took over large parts of Europe.

Savage Continent shines a light on many forgotten or neglected acts of cruelty and revenge. In Poland, genocidal ethnic cleansing took place between Polish and Ukrainian communities. Across eastern Europe the remnant Jewish population found that many people wanted to finish what the Germans had started. Ethnic Germans in the millions were forced out of this part of the continent, and all corners of Europe saw reprisals against those seen, rightly or wrongly, as collaborators. And on top of all this there were civil wars between communists and fascists in Greece and northern Italy.

One of the most important points Lowe makes is that in what became known as the Eastern Bloc, postwar ethnic cleansing produced countries that were virtually homogeneous in terms of ethnicity, religion and language. This helps explain how ethno-nationalist political parties have recently risen to the top in places like Hungary and Poland. Those countries were once relatively cosmopolitan, but now, after several generations of isolation, they have become intolerant and fearful of the free movement of people that's part and parcel of membership in the EU. All wars have an afterlife, but the Second World War may have the longest.
Posted by Cary Watson at 8:56 AM

OK... but where's the book review?

"Brisk and brilliant." There's your blurb. ;)