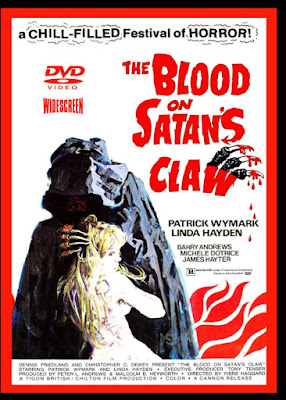 The sub-genre of folk horror films is a tidy one, which is to say it's pretty small. Scurry around the Internet and you'll find various lists of folk horror films, the most prominent titles being The Wicker Man (1973), The Witch (2015) and Witchfinder General (1968). A handful of other titles appear on these lists, and the common denominators are that the tales are often set in the past, invariably in the countryside, and the action usually takes place somewhere in the British Isles. As a genre, it has the usual mix of duds, just-ok's, and hey-that-wasn't-bads. The Witch is actually a horror classic, folk or otherwise. I've always thought The Wicker Man was wildly overrated. Like a lot of genre films from the early '70s, it's perhaps more interested in women getting their clothes off than it is horror. And it isn't the least bit frightening. Witchfinder General doesn't even have nudity to recommend it. It's just deadly dull.

The Blood on Satan's Claw is a slightly better than average example of folk horror. On the negative side, it's plot doesn't stand up to the most minor scrutiny. An 18th century English peasant plows up a skull that has an eye glaring out it, and this somehow causes the local youths (and a few adults) to become Satan worshippers. The causality is murky, to say the least. Characters appear and disappear without explanation, there are continuity hiccups, and the finale is a bit of a damp squib.

What the film does have going for it is a genuinely eerie atmosphere.This is accomplished thanks to some first-rate cinematography that's very unusual for films of this genre and era. The English countryside is alternatively gorgeous and menacing, and its 18th century setting is made convincing with good locations and production design. The musical score is the equal the cinematography, which is perhaps even more unusual. Scores for low-budget horror films have a sorry habit of being as literal as the music in Bugs Bunny cartoons. All in all it's a fun film to watch unless you're a stickler for plot coherence, or are either disappointed or offended by the amount (minimal) of gratuitous female nudity on offer. And it's certainly more imaginative and well-crafted than those lame-ass found footage horror films that clutter up multiplexes on a regular basis.
Posted by Cary Watson at 9:18 AM

Email ThisBlogThis!Share to TwitterShare to FacebookShare to Pinterest
Labels: The Wicker Man, The Witch, Witchfinder General

Glad to have finally come across a folk horror film that won't turn out to be a disappointment, all thanks to your wonderful review. Keep up the good work!