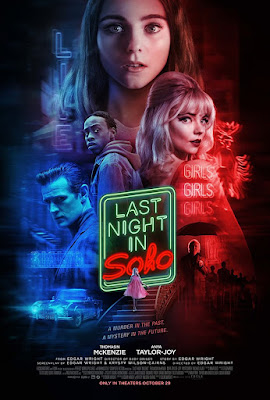 Sad to say, but it appears that Edgar Wright, director/writer of Last Night in Soho, is following Quentin Tarantino's career arc. Both started fast but are fading in the stretch, undone by a tedious and self-indulgent obsession with glorifying B-movie tropes and crafting calorie-free cinematic set-pieces. Wright's last film, Baby Driver, was built around the idea of, hey, wouldn't it be cool if car chases were synchronized to pop songs? Music videos, in other words. Attached to this unoriginal idea were a boatload of heist movie cliches, a much-hyped, but unimaginative, continuous take, and a romantic relationship that was only plausible if you accepted the idea that the female half of the romance was dumber than a bag of hammers.

Soho is even poorer, and with even less attention paid to the plot. Twentysomething Eloise comes to London to attend fashion school, and to be scorned and humiliated by a small group of fellow female students who seem to have been drafted in from a TV series about an especially bitchy American high school. Eloise has a West Country accent that Thomas Hardy would find too much, and is such a country mouse it's a surprise that she doesn't live behind a skirting board. She can't take the hazing at the school residence so she moves into the top room of a tall, gloomy house in Soho. Faster than you can say "Swinging Sixties," Eloise is suffering from hallucinations/visions/dreams/hauntings (you choose, clearly Wright can't make up his mind) every time she falls asleep. During these night terrors Eloise journeys back to 60s Soho and follows, literally, an aspiring singer named Sandie who wants to be the next Cilla Black, which isn't overly ambitious; it's rather like an American singer wanting to be the next Connie Stevens. Sandie soon falls into the clutches of a promoter/pimp well-played by Matt Smith, who soon has her turning tricks rather than singing. And it all ends in murder most bloody!

The plot, like Tarantino's post-Jackie Brown efforts. is a spindly coatrack on which to hang big, busy set-pieces. The camera swirls endlessly around lavishly-realized Soho nightclubs, CGI puts Eloise in the middle of the action like a wide-eyed ghost, and the period clothing and detail is so shiny and bright it feels like it's just arrived from a mid-century modern future. The film is really nothing more than these incessant flashbacks, each of which reveals a morsel of plot leading to a final twist that's a Grand Guignol of nonsense. Thomasin McKenzie plays Eloise, and it's a role that only asks her to scream, run, scream again, do some more running, and then look doe-eyed and put-upon. Her screaming and running are adequate. Sixties icons Terence Stamp, Diana Rigg and Rita Tushingham make cameo appearances and cash a paycheque. And poor Michael Ajao is stuck with playing John, Eloise's erstwhile boyfriend, a character so underwritten he might as well be a cardboard cutout with attached speech bubbles.

Wright's best films, Shaun of the Dead, Hot Fuzz, and The World's End, were parodies of well-worn genre pictures, but they gave him a solid structure to follow. As weak as Baby Driver was, it at least had a conventionally twisty heist plot to surround the vanity car chases. Soho is badly in need of a genre to give Wright navigation points. It's an awkward mix of the supernatural, psychological horror, and giallo, but none of it is convincing, and, bizarrely, the film's finale could have been lifted from a romance on the Hallmark Channel. At least Wright hasn't stooped as low as Tarantino and given himself a role.