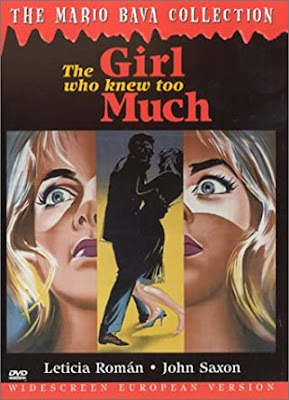 The giallo genre is the gift that keeps on giving. Just when I thought I'd seen all the famous ones, and a lot of the obscure ones, along comes The Girl Who Knew Too Much and The Corruption of Chris Miller. The former is a sort of mash-up of Roman Holiday and a Hitchcock thriller, and the latter is a riff on Polanski's Repulsion. And both bear one of the hallmarks of gialli; they're heavily influenced by more famous films and directors. To be even more specific, the entire giallo genre probably doesn't exist if Psycho and Diabolique hadn't come before. In the 1960s and early 70s, Italy was the counterfeit designer label purveyor of the film world, churning out ersatz westerns, spy films, and toga (called peplum in Italy) epics, all of them low budget versions of costlier, starrier, made in Hollywood (mostly) films. But here's what's so remarkable and enjoyable about these Italian B-movies, especially the gialli: cinematically speaking, they were frequently better than their major league progenitors. For proof, look no further than Vittorio Storaro, the 3-time Oscar-winning cinematographer, who also shot two notable gialli, The Bird with the Crystal Plumage and The Fifth Cord.

The Girl Who Knew Too Much and The Corruption of Chris Miller are both good examples of gialli that look better than they have to. Girl is directed by Mario Bava, who is usually credited with kick-starting the genre with this film and Blood and Black Lace (1964). Bava did amazing things visually on low budgets, and this is a fine example. Shooting in black and white, he uses Roman locations like the Spanish Steps to striking effect, and one sequence set in an empty apartment lit by bright, bare lightbulbs is stunning. Corruption is in colour and pays close attention to wardrobe and interior design. It was shot by Juan Gelpi who gives the film a glossy look that might be a homage to the Hollywood melodramas of Douglas Sirk, which fits, roughly, the subject of the film. Gelpi also did fine work on They Came to Rob Las Vegas, a heist film shot in Nevada, California and Spain. The director of Corruption was Juan Antonio Bardem, who, it turns out, was Javier Bardem's uncle. 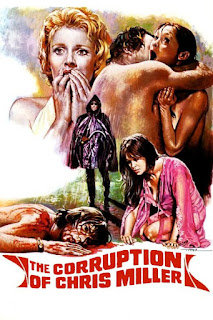 As good as both films look, they suffer from faults common to gialli. The plots are twisted and ambitious, but ultimately don't hang together. Girl starts with a bang with the eponymous heroine, an American tourist, encountering a drug smuggler on her flight to Rome, followed in very short order by witnessing her aunt's death, meeting a hunky doctor, becoming the victim of a mugging, and then witnessing a murder that may have happened ten years previously. It doesn't really add up in the end, but it's fun to go along for the ride and the tone is more whimsical than murderous. Corruption revolves around a rich woman, Ruth, who lives in a big house with her step-daughter. The man of the house ran out on them some years ago, and now his abandoned wife has some vague plan to corrupt his daughter, Chris, in revenge. This side of story is rather confused, especially since Ruth seems to have the hots for Chris. A handsome drifter turns up and Ruth hires him to be a handyman, and he takes an interest in both women. Chris, however, is terrified of sex. People start getting murdered in the area, suspicion falls on Barney the drifter, and the film ends with the most spectacular knife attack scene since Psycho. And, like many gialli, the acting is a mix of dodgy and competent.

So why did Italian B-movies look so much better than their American equivalents? The answer, I'd theorize, comes from the two countries contrasting experiences with television production. In Italy, television only began in 1954 and there was only one channel, RAI, the state broadcaster. A second channel was added in the 60s. Variety shows dominated the limited programming time available, and this meant that TV was not a deep or varied source of talent for film production. In the U.S., TV employed a relative army behind the camera, and these people, with their training in the style and look of TV, were the ones who often made the B-movies. Italian films, then, were largely made by people who drew their influences and experience from films, not the TV industry. The Italian film industry remained vibrant and prolific until more TV channels were allowed on-air in the late 70s and 80s, after which the domestic box office for Italian films cratered. Like I said, it's a theory.

Email ThisBlogThis!Share to TwitterShare to FacebookShare to Pinterest
Labels: giallo