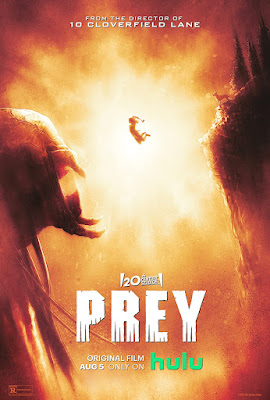 I've seen plenty of online comments which describe Prey as the best Predator film since the original. That's a very low bar to set, and this iteration doesn't clear it. And I so wanted to like it! Comanche vs Predator in the 18th century? Pump that ultra high concept shit right into my veins. The fact that Disney sent this straight to streaming was an admission on their part that it wasn't something they were happy with, and it's easy to see why. It's a naked and clumsy attempt to monetize old IP by cobbling together a hack script with some really cheap and cheesy CGI.

It's a toss-up which is worse: the script or the visuals. Aside from a couple of establishing shots of glorious mountain scenery, the rest of the film doesn't look better or worse than any random episode of a show on the Outdoors Channel, and the CGI critters (there's lots of them) are astonishingly inept. Uncanny valley bad. CGI this weak effectively breaks the fourth wall and makes the audience either laugh or groan. More digital attention is paid to the Predator, but the problem there is that it's on screen too much. The original film rationed out its appearances to maximize the creature's shock value--the same principle that made Jaws work so brilliantly. In this outing the merciless alien is constantly seen on the hunt, which ups the body count (animal and human), but makes the Predator less visually impactful. And why no close-ups of its face?

The script's dull, boilerplate dialogue could be swapped out with any number of generic action films and it wouldn't make a bit of difference. The writers even recycle the "If it bleeds, we can kill it." line from the first film, although here it's delivered with all the panache of a fast food server reading back an order at a drive thru. What with all the hunting and killing, there's no time for characterization. Naru, the heroine, is the standard-issue aggrieved teenager who feels they're meant for bigger and better things but mum/dad/older sibling don't believe in them. Amber Midthunder plays Naru, and I'll be charitable and say that the script doesn't allow her to show whether she can act or not.

The action sequences, which are bloody and frequent, are weakened by off-the-shelf fight choreography. When Naru takes on a gang of French trappers you could be forgiven if you think you're watching Captain America or Agent Romanov taking on baddies from the MCU. The slick, polished, tightly choreographed fight scenes of the Marvel world are the template here, and it's rather jarring when it's used in this setting. Something grittier and less obviously choreographed was needed.

The film's PR machine has made much of how Prey has lots of Native American representation in front of the camera. True, but the creative team then made the decision have all the characters speak like contemporary teens and twentysomethings. Similar to corporate greenwashing, the film indulges in what could be called Indigenous-washing. The beliefs system, language structure, and moral code of the Comanche of 1719, were, needless to say, light years from our world, and the way they articulated their thoughts would have reflected this. By making them sound just like the average North American, the film denies their difference, takes away that uniqueness. It feels as though the producers were worried that a female lead fronting an all-Native American cast would alienate viewers, so they decided to sugarcoat the pill by having them sound like any random group of people hanging out in a suburban Starbucks. It doesn't have to be like this. Phillipp Meyer's western novel The Son (also an AMC mini-series) manages the tricky job of making the Comanche sound both profoundly different and contemporary.

Although this new direction for the Predator franchise flops hard, it offers a glimmer of hope for further adventures. I'd love to see the big guy take on medieval knights, but the one I'm really hoping for is Predator vs Shaolin Monks done in full Golden Harvest style. Tarantino would come out of retirement for that one.