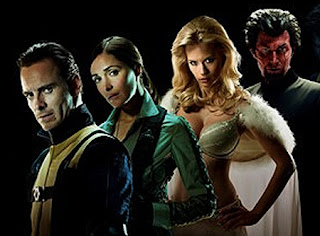 Here's the odd thing about superhero/CGI movies: they lack visual style and artistry. It's odd because, in theory, a director can create any kind of image he wants these days. So many of these films stuff themselves with visual effects, but almost none of them have any kind of visual artistry. Shot composition, the use of colour, lighting effects, and camera movement seem to be alien concepts in most of these films. In many ways these films are a throwback to the silent era of a Cecil B. DeMille, when the camera's only purpose was to act as a recording device for the sight of thousands of extras milling around on grandiose sets. The X-men movies and their ilk achieve a similar result; we end up seeing what the CGI boffins are capable of, but not what the D.O.P. and the director can do.

And this is at the heart of what's wrong with X-Men: First Class. The film has some energy and interest when James McAvoy (Dr. Xavier) and Michael Fassbender (Magneto) hold centre stage, but once the CGI action starts, things get very dull, and I mean visually dull. The director, Matthew Vaughan, stages the action with less flair than a Saturday morning cartoon, and the cinematography in all scenes is flat and lifeless; a sitcom can look like this, but not a film.

Other complaints: Michael Fassbender's English accent goes on hiatus at times, to be replaced by a flat American accent, and, on a few occasions, by his own Irish accent. January Jones as Emma Frost is so wooden you'd get splinters if you saw her in 3D. And, finally, the various subsidiary mutants are a pretty sorry bunch of actors with lame mutant skills to match. The worst has to be Banshee, who flies around through the power of shrieking, which, by my reckoning, would make most 14 year-old girls mutants.
Posted by Cary Watson at 10:33 AM