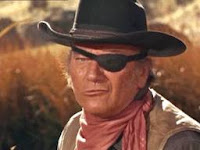 After recently seeing the Coen brothers True Grit for the second time (on DVD), and having seen the John Wayne-starring version on numerous occasions, I can definitely say that...I'm not sure which is better.

Let's begin with the stars.  Jeff Bridges is a masterful actor, better than John Wayne ever was, but in this role he gives a rather predictable performance. He talks in a gruff, growly monotone, and basically tries to let Charles Portis' brilliant dialogue do the work for him. Wayne, to be honest, hammed it up. He set the John Wayne dial at 11.  Bridges creates a more believable character, but Wayne extracted more entertainment value out of the role.

Moving down the cast list, Matt Damon and Hailee Stanfield are a quantum improvement over Glen Campbell and Kim Darby. Campbell shouldn't have been allowed in home movies let alone feature films, and Darby I found irritating instead of determined. When it comes to the minor characters, however, the older version wins hands down, with A-list character actors such as Robert Duvall as Ned Pepper, Dennis Hopper as Moon, and Strother Martin as Stonehill, the horse trader unlucky enough to barter with Mattie Ross. For the sake of comparison, check out Martin's scene with Mattie and compare it with the Coen version using an actor named Dakin Matthews. The two sequences are virtually identical, but Martin turns the scene into a small comic gem. Matthews just reads the script.

The 1969 True Grit has a conventionally pretty look to it. The Coens make their True Grit look, well, gritty. And that's a plus. The Portis novel was a de-romanticized version of the Wild West, and the Coens remain true to that idea by showing us buildings and people that almost give off the smell of manure, sweat and tobacco. This tough look also makes Mattie's journey into the wilderness seem that much more daunting and dangerous. The 1969 version made the trip seem like a bit of a holiday.

The backbone of any western is the action sequences, and in this regard the Coens fall flat. Henry Hathaway, the 1969 director, had been directing westerns and action movies since the advent of sound, and it shows. His action sequences are fluid and energetic. The Coens, on the other hand, have a static, unimaginative approach to action. This may be where their committee approach to directing lets them down. The scene in the dugout cabin where Rooster Cogburn questions Moon and Quincy is a good comparison point.  Hathaway builds tension in the scene by having Moon become increasngly agitated due to his leg wound.  He also parallels this action by having Quincy become more violent as he cleans a turkey carcass (the Coens omit the turkey), while at the same time he's showing us Mattie becoming more distressed by the rising tension and anger. When violence suddenly erupts it's like a hissing boiler suddenly exploding. The Coen version has Moon talking in a flat montone up until he's mortally wounded by Quincy. The whole scene is shot with a minimum of fuss and a minimum of excitement.

The winner? Both. I just wish Glen Campbell hadn't been in the original and that the Coens could have had a coaching session from John Woo.
Posted by Cary Watson at 12:15 AM