Book Review: The Fortress of Solitude (2003) by Jonathan Lethem 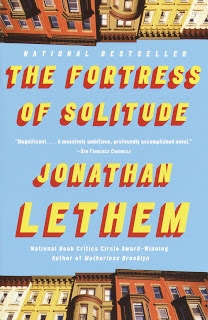 The first half of this novel constitutes one of the best coming of age stories I've ever read. All the fears, insecurities, loopy fantasies, and feverish joys taken in the simplest of achievements or pleasures--everything that makes childhood and adolescence such a tortuous and ecstatic time--is in here. Dylan Ebdus is the boy who comes of age, and he does so in Brooklyn in the 1970s. His Brooklyn is not the gentrified, hipster zone it's now become. Dylan's Brooklyn is where stickball and stoopball are still played, and racial tension is out in the open at all times. Dylan's family is one of the few white families in the area, although the first hints of future gentrification are visible. His best friend is Mingus Rude, a black boy whose father, Barrett Rude Jr., was once a semi-successful soul singer. Dylan and Mingus bond over a shared love of comic books and superheroes, and, later, graffiti. Dylan's father, Abraham, is an artist and experimental filmmaker. His wife, Rachel, abandons the family when Dylan is about thirteen.

Dylan's young life suffers from two torments: his mother abandoning him and the bullying he suffers as virtually the only white kid in an predominantly black and Hispanic neighborhood. Mingus provides some protection from bullying, but Dylan, as the title suggests, spends his youth living in various kinds of solitude, some of his own making, some forced on him by his environment and his peers. As I said, this half of the novel is a brilliant, etched in acid portrait of the highs, lows and the boring bits in-between that constituted the life of someone growing up in the early 1970s. I speak from experience.

The second half of the novel almost goes completely off the rails. The action has jumped forward to the 1990s and Dylan has become a music journalist living in California. Abraham has a new wife and is a semi-celebrity as an illustrator of SF novels. Mingus and his father are both drug addicts, and Mingus has been in and out of jail multiple times. Dylan has not been able to put his troubled childhood behind him, and feels that he has to do something for Mingus, who is in a prison in upstate New York.

There are a lot of different problems with this section of the book. The major one is the depiction of the black characters. With one minor exception all of them are criminals, drug addicts or derelicts. Lethem writes about them with great sensitivity and insight, but the unvarnished truth is that they only exist in the story as devices to give depth and definition to Dylan. Black poverty and criminality ends up being used to show Dylan's feelings of guilt and anger; they act as a backdrop to throw Dylan's state of mind and  existential conflicts into focus. Lethem doesn't bother to tell us why his black characters have all ended up down and out, there's no attempt to put their downfall in a social context, it simply happens to every black person in the novel. It's certainly true that the coke and crack epidemics of the '80s and '90s took a heavy toll in the black community, but it was still only a minority of the black population that was affected to the degree we see here. I may be off-base with my take on this issue, but if I imagine an African American reading this novel I can only think he or she would be deeply offended. It's significant that the only white character who takes a criminal path (a nerdy kid named Arthur) eventually manages to rehabilitate himself into a pocket-sized property tycoon. Blacks aren't allowed second acts in this novel. The long and the short of it is that black suffering is being exploited for dramatic purposes.

Another problem is that the story loses focus once Dylan is an adult. We follow him as he reconnects with his father; meets an egregious lawyer; fights with his (black) girlfriend; looks for his mother; pitches a film project at Dreamworks Studios; and attempts to rescue Mingus from prison. Lethem's writing also suffers. The scenes with his girlfriend are filled with the prickly banalities one normally hears in self-consciously serious primetime TV dramas, and the scene at the Dreamworks offices is a tired and generic parody of a Hollywood meeting. The "rescue" of Mingus can either be looked at as a white liberal guilt fantasy trip or a disastrous decision to mix in some magic realism. Either way it doesn't work.

Even with all the problems in the second half this remains a mostly excellent novel. Lethem's prose is always daring, energetic and innovative, and he deserves credit for writing a novel that dares to show that there's a class system in America. But I'd really, really like to hear what African American readers and reviewers have to say about this book, so if someone can point me towards any online commentary along those lines, please leave a comment. And for a very alternative view of the black experience in Brooklyn, check out my review of Brown Girl, Brownstones by Paule Marshall.

Email ThisBlogThis!Share to TwitterShare to FacebookShare to Pinterest
Labels: Brooklyn, Jonathan Lethem, The Fortress of Solitude