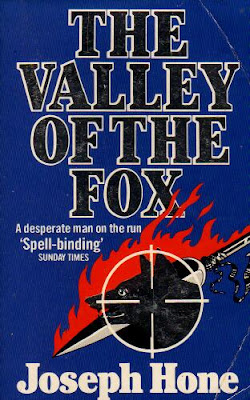 Reading this novel is a bit like watching a seriously drunk man wander down a street: for some stretches he manages to hold a steady, sensible course, but then he'll suddenly list over, or attack a turn at an odd angle, or even smack into a pole. Hone's novel, like the drunk, is unpredictable and frequently entertaining in an, "Oh my God, look what he's doing now!" sort of way. In very general terms this is an adventure story, featuring Peter Marlow, the hero of several of Hone's previous novels. The other Marlow stories were built around espionage, and are some of the best spy novels written in the last century. This time out, Marlow is retired and living in the Cotswolds with his wife of one year, Laura, and her autistic eleven-year-old daughter, Clare, from a previous marriage. Peter is working as a schoolteacher at a boarding school. One night an armed and masked intruder bursts into Peter's home and opens fire, missing Peter but killing Laura. Peter assumes British Intelligence has gotten wind of the memoirs he's writing and wants to silence him. Peter now has to go on the run since there are no witnesses to the attack and the police believe he killed Laura. He flees cross-country and takes shelter in the heavily wooded grounds of a huge country estate. The estate is owned by Alice, a wealthy American woman in her late thirties who stumbles upon Peter's hiding place and decides that she believes his story. Alice shelters Peter, and the two of them hatch a plan to snatch back Clare, who is in the hands of the authorities.

I don't want to go on forever describing the twists and turns of the plot, but suffice it to say that things get progressively more bonkers, and that's exactly the dilemma faced by anyone reading this book: is it brilliant or bonkers? Hone's prose and psychological insights are as sharp as ever, but the story goes off in some absolutely mad directions involving fossil hunting, H. Rider Haggard-style adventures in Africa, a cameo appearance by some Hell's Angels, and a section in which Marlow lives an entirely arboreal existence. On one level this novel is an entertaining, if mad, adventure yarn of the kind Geoffrey Household used to write. But Hone isn't that simple a writer. On another level this novel appears to be either an elegy for an England that has lost its empire and unique spirit, or it could equally well be an acidic look at the lies and cruelties that kept the Union Jack flying.

The most notable characteristic of this novel is that it's bathed, no, drenched in Englishness. There are veiled and direct allusions to Arthurian legend, the country house is a warehouse of Victorian bric-a-brac and colonial souvenirs, cricket features prominently in the plot, and the Cotswolds countryside, lovingly described by Hone, is the most English of landscapes; it's home turf for Rupert the Bear and Ratty, Mole and Mr. Toad, and I wouldn't have been that surprised if Marlow had bumped into one of them at some point. The nearly suffocating level of British cultural references reaches a kind of crescendo when Marlow, avoiding a police search of the mansion, escapes down a dumb waiter and is actually "consumed" by a building that contains the quintessence of all that is British:

But everything had been perfectly built and carpentered here and I slipped down gently, soundlessly, through the guts of the house, down this dark gullet, without any problems.

At an early stage in the novel Marlow makes this observation:

There weren't any more dashing people left in England, I suddenly decided; only crafty ones. The idealists, the witty drunks, the eccentrics, they were all gone. Decent fools like Spinks, for example, they got the chop every day, while the cunning, the dull and the vulgar prospered. The small men had come to rule.

Yes, it sounds cranky and reactionary, which is what makes the novel ocassionally seem like a curmudgeonly lament for an England that has disappeared. And at several other points Marlow's views are restated in equally bald terms. At times Hone, and Marlow,  seem to be willfully living in the past. There's some un-PC language that would have sounded tone deaf if written twenty years previously, and the England that's described here feels like it was preserved in 1930s amber.

As I said before, Hone is not so simple a writer. Looked at from another angle the novel is a rubbishing of the myths of England's "green and pleasant land." The character of Clare is at the heart of the story, and her origin myth, as it were, is revealed to be part of a shocking and brutal crime committed by one one of those adventurer-explorers so beloved in British history. And the country house, that ark of Albion, is kept alive by American money and is actually a kind of open prison for Alice (a raging anglophile), who turns out to be as mad as a hatter. Behind the false front of cream teas, cricket pitches, rolling green fields speckled with snowy white sheep, and stately, ancestral homes lies violence, greed and insanity.

I'm still having the brilliant vs bonkers argument with myself, but on the whole I'd have to say that The Valley of the Fox is just a little too quirky for its own good. The prose is always first-rate, but the story's demented plot twists finally move past farfetched and into silliness. It's still worth reading, but it's not in the same league as Hone's previous Marlow novels, The Private Sector and The Oxford Gambit. And one last thing: a couple of elements in this novel bear a striking similarity to Italo Calvino's The Baron in the Trees, which I reviewed earlier this summer. It's not a case of plagiarism, but it's hard not to think that Calvino's eccentric novel might have inspired Hone's equally odd book.
Posted by Cary Watson at 11:36 PM

Email ThisBlogThis!Share to TwitterShare to FacebookShare to Pinterest
Labels: Geoffrey Household, Italo Calvino, Joseph Hone, The Baron in the Trees, the Cotswolds