Book Review: Going to the Dogs (1931) by Erich Kastner 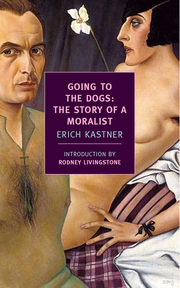 Germany during the Weimar Republic is one of those times and places in history that has a peculiar hold on the popular imagination. We see it as being uniquely decadent, revolutionary, perverse, artistic, uninhibited, violent, febrile and doom-laden; it's where the 19th and 20th centuries met in a head-on collision that we're still picking up the pieces from. Based on this novel, written only a few years before the Nazis took power, that's exactly what those times were like. And here's how Jacob Fabian, the novel's protagonist, describes Europe's mood:

"Europe had been let out of school. The teachers were gone, the time-table had vanished. The old continent would never get through the syllabus. Never get through any syllabus!"

Erich Kastner was one of Germany's most celebrated intellectuals; an accomplished poet, literary critic and the author of the hugely successful children's book Emil and the Detectives. Going to the Dogs (published as Fabian in Germany) is Kastner's literary snapshot of life in Berlin in the late 1920s. Kastner's hero is Jacob Fabian, a thirty-two-year-old copywriter who wanders the city witnessing how Berliners react to the stresses of the times. What we glean from Fabian's picaresque adventures is that Germans staved off despair and angst by living emphatically and sensuously in the present. Fabian's Berlin is filled with sexually voracious men and women who crowd together in brothels or places like the Anonymous Club, where lunatics are hired to entertain the patrons. Yes, this fictional Berlin easily meets the weirdness quota one would expect from a story set in Weimar Germany.

What makes the novel resonate with a modern reader is Fabian's humanity, his halting, reluctant desire to be something better than he is. Fabian is both a victim and a participant in the downfall of society, and he's very aware that worse is to come. As grim as the background to this novel is, this isn't a grim novel. Kastner has a spritely wit and cynicism that makes the downward trajectory of German society entertaining, if not palatable. Several fine novels of the 1930s deal with the feeling of imminent doom hanging over Europe--George Orwell's Coming Up For Air, Eric Ambler's Journey Into Fear, Aldous Huxley's Eyeless In Gaza--and this one certainly belongs in the same class.