Book Review: The Big House: A Century in the Life of an American Summer Home (2003) by George Howe Colt 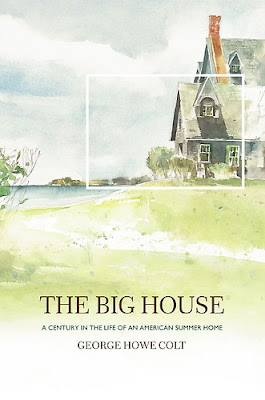 Part memoir, part nostalgia binge, part history of Cape Cod, what makes this book interesting is its study of the habits and attitudes of WASP Americans. Put your hand up if you're a WASP...No one, of course, put their hand up because a WASP would never want to be noticed or singled out. Speaking as a WASP (Canadian division), I'm annoyed with Colt for breaking the unwritten rule (all WASP rules are unwritten) that attention should never be drawn to oneself. We WASPs also like to use words like "oneself."

The titular house was built in 1903 on Cape Cod for the Atkinson family, well-to-do Bostonians whose family tree had very deep and well-connected roots in American history. At the time the house was built, Americans, and the middle and upper classes in Europe, were beginning to see the seaside as a vacation destination. "Sea bathing" was regarded as healthful and fun. It also gave the affluent a chance to show off their wealth by building summer homes. Flashy oligarchs like the Morgans and Vanderbilts buiilt showy piles farther up the coast in Newport, Rhode Island. Wealthy WASP Bostonians colonized Cape Cod, building homes that were built for comfort and large families, but not for show.

As the book begins in 2003 the Big House is up for sale and about pass out of family hands. The house is now owned in common by descendents of the Atkinsons, and the passing years have seen their collective wealth diminish to the point where upkeep and taxes on the house have become onerous. George Howe Colt (WASPs always use their middle names) spent most or part of every summer at the Big House, and a large part of the book is his memoir of the joys and peculiarities of summer life in Cape Cod. This aspect of the book is quite good. Colt is very effective at recreating the magical impact a big, rambling house by the beach has on kids and teens. At times Colt trips over into dewy-eyed sentimentality, but those episodes are, thankfully, few and far between.

Colt's portrait of his Atkinson/Colt ancestors and relatives is fascinating as a field guide to WASP customs and behavior. He pulls no punches when describing the stiff upper lips, the quiet despair, the discreet alcoholism, marriages that crumble behind closed doors, and etiquette and tradition used to tamp down emotions and desires. Yup, that's life as a WASP. But it's not all angst. Colt speaks with justifiable pride about his family's history of public service and commitment to supporting each other through thick and thin. At times his memoir touched pretty closely on my own life as a WASP, although my family tree had a lot less money and never shaded a summer home. As a memoir of summer life in a beautiful part of the US, The Big House is enjoyable, although it has to be kept in mind that this was, and is, a privilege that comes to a very few people. As a look at the beige heart of WASPiness, it's much more intriguing, although Colt will have to answer for his candidness; I insist he report to a council of his elders at the yacht club nearest to him.
Posted by Cary Watson at 5:07 PM