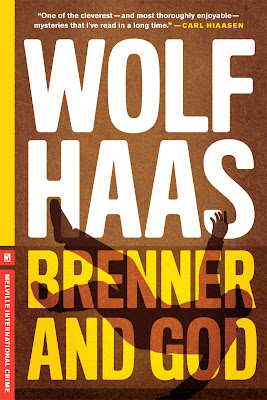 Judged solely by its plot, this Austrian mystery is a bit of a disaster. The crime at the centre of the story is the kidnapping of a young girl named Helena. Her mother is an abortion doctor and her father is a wealthy land developer. Helena is taken while in the care of Brenner, an ex-cop presently working as the family's chauffeur. The suspects in the kidnapping include an anti-abortion activist and various people associated with Helena's father's business activities. Brenner feels responsible for losing the girl and starts hunting for her, albeit in a shambolic sort of way.

The plot is stuck together with spit and masking tape, and in the end it turns out to be a bit of a shaggy dog story. Thankfully the plot is the least important aspect of the novel. The story is narrated by an unnamed character who is the true star of the book. He might be an old man buttonholing a stranger to tell his story, or, based on a couple of odd lines in the book, he could equally well be a loony sitting in a park telling his tale to a swan. Our narrator is wildly discursive, philosophical, something of a semiotician, humorous, a social commentator, and very, very entertaining.

Any one picking up this book expecting to read a more or less conventional work of crime fiction is going to be deeply disappointed. You'll either accept its wildly eccentric narrative voice and train wreck of a plot or drop the book like a hot coal. My only beef with the novel is that the translator should have provided a few footnotes or even some kind of introduction. A few German words are used without any hint of what they mean, and some background information on some Austrian locations and institutions would be very beneficial.
Posted by Cary Watson at 4:29 PM