Films from the Big House 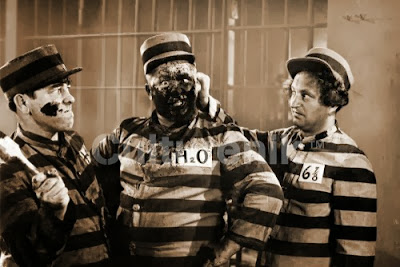 One blog I like to wander through regularly is www.pulpcurry.com. Andrew Nette's blog deals in crime fiction, but another aspect of it that really draws my attention are the links to the covers of pulp paperback novels from the 1950s, '60s and '70s. The lurid, enticing, and dynamic artwork on these books takes me right back to my youth when I used to loiter in my local W.H. Smith, paralyzed between buying a book that I knew was respectable and good (a John Wyndham, maybe) and something with a cover that spoke directly to my internal organs (a Carter Brown, certainly). Andrew just posted some covers from novels set in prisons, and while I've never read a prison novel, I realized that of all the prison movies I've seen over the years not one of them has been a dud. In fact, this genre as a whole has a remarkably high success rate. Whether the subject of the film is life in prison or an escape, it seems to be a reasonably foolproof genre for writers and directors. I'm not sure why, but I'd guess that a prison-set story requires stripping away a lot of the extraneous story and character buildup that other genres tolerate. To paraphrase Samuel Johnson: Prison scripts concentrate the writer's mind wonderfully. And so here's my personal  top ten prison movies:

The setting is a British military prison in North Africa during WW II, and the subject is the corruption of authority. Sean Connery gives his best performance as a persecuted prisoner, and the cast is filled out by a who's who of Brit actors bellowing their lines as though trying to be heard back in the UK. Special mention to Harry Andrews in the shoutiest role of his long and shouty career.

Yet another anti-authority story, this time set on a Florida chain gang. It's slick, it's funny, it's tense, and every scene in the film is designed to highlight Paul Newman's star power and that's OK with me.

This is a true story of an attempted escape from a Paris prison in 1947. It's told in a documentary style and there's no attempt to glamorize the five prisoners planning the escape; we simply start rooting for them because they're so damned clever and determined.

Sometimes this film feels as long as Henri Charriere's actual prison sentence on Devil's Island, but you can't beat its Hollywood epic quality and the charisma of Steve McQueen and Dustin Hoffman.

The blacksploitation genre was dead by the time this no-budget effort came along, but its almost all-black cast, a lot of them non-actors, give this film a rawness that makes it feel like an actual trip behind bars. It's not a conventionally good film, but it certainly holds your attention.

Some genius decided to combine a sports movie with a prison film and this is the goofy classic that resulted. I nearly laughed up a lung when I first saw it, and for my generation of filmgoers it made a stretch behind bars look like a fun option. The definitive Burt Reynolds performance.

If The Longest Yard made hard time look like fun time, Scum takes the scared straight approach. It's set in a British prison for juveniles and it's still probably the nastiest, most violent prison film I've ever seen. A young Ray Winstone has a star-making turn as the new boy who climbs the ladder of brutal violence to become the prison's new "Daddy." Show this one to your young son and he'll be afraid to jaywalk.

The Bible, Torah and Koran of prison movies. It's nearly three hours long and there isn't a single second of it that feels superfluous. Vastly entertaining, the secret to its success was revealed to me when I showed it years ago to my son. He became addicted to watching it, and I realized that it's appeal comes from showing a bunch of men who are obliged to misbehave; they steal, sneak around, pull pranks, and thumb their noses at all authority figures. They're very naughty boys, and the film speaks to the bad kid inside each of us.

A newly-minted prison guard in a Spanish prison gets caught up in a prison riot and has to pass himself off as a prisoner in order to avoid getting the chop. The basic premise is brilliant (and supposedly has been bought for a Hollywood remake), and even if the execution isn't always the equal of the original concept, this is a clever variation on the genre.

Just to shake things up I'm going to call this French film a prison movie. It's set in a very strange school for young girls who are not allowed to leave the walled grounds under any circumstances. It looks great, it's deeply weird, and you'll either love it or hate it. And here's my original review.
Posted by Cary Watson at 4:39 PM