Book Review: Cities of the Plain (1998) by Cormac McCarthy 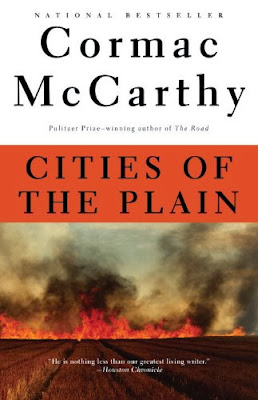 Cormac McCarthy is one of those authors I've been skittish about trying. I've read the glowing reviews of his work, but many of those reviews have seemed too fawning, often written in the voice of someone trying to elbow their way onto the latest literary bandwagon. And then I've come across a few critics who say that McCarthy's wildly overrated, but then that's to be expected when an author starts pulling down major awards and film deals. Well, I finally took the plunge. What a load of bollocks.

So what explains McCarthy's literary street cred? Let's begin with his prose style, which consists of simple declarative statements linked by a conga line of "ands" to create sentences of surpassing dullness. For example:

If this sentence was presented in a more conventional manner we'd have writing that's as lifeless as most instruction manuals or something by James Patterson, but thanks to all those "ands" McCarthy gives his writing a hollow portentousness and the rhythms of Old Testament prose--And lo, Ephraim begat Ishmael who begat Oatmeal who begat...You get the idea. But is Cormac's affected, but easily digestible, prose enough to explain his success? Nope, there's more. Key sections of dialogue are written entirely in Spanish. Only a truly brilliant writer (or so the critics must think) would dare to be so willfully opaque and challenge his readers. And in-between the flat, metronomic descriptions of characters doing not much of anything, we get mystical, allusive musings on, well, you know, life and horses and the things men must do in a manly way because they're men who are manly. It's the sort of writing that William Faulkner set a high standard in, but when lesser mortals try their hand at it things can go wrong. Very wrong.

Did I mention the plot? No, of course not, because there barely is one. A cowboy in New Mexico falls in love with Mexican prostitute living across the border and things don't go well. It's a tired story and McCarthy barely does anything with it. Most of the novel is taken up with digressive sections on horse training, hunting, riding the range, and a dozen other inconsequential episodes. There's no shame in skim-reading parts of the book.

But what I found most annoying about Cities of the Plain is McCarthy's patronizing view of his cowboy characters. Like many intellectually-lazy middle and upper-middle class writers, he views the working class as being an undifferentiated mass. The four or five cowboy characters who form the backbone of the novel all talk, act and think the same way, and they feel more like stock characters from generic western films than actual flesh and blood people. If a writer created a group of middle-class people who were essentially identical he'd be criticized for weak characterization, but when it's done to working-class characters no one takes any notice. McCarthy writes about his cowboys the same way nineteenth-century writers wrote about the "noble savage." The writer doesn't actually want to be a cowboy or noble savage, but it's fun to go slumming and write about their simple yet endearing lives--the little people have so much to teach us if only we'd listen.

The quickest way to describe McCarthy is to say that he's taken stylistic elements from Hemingway and Faulkner and then made a complete hash of them. I find his success baffling after this sample of writing, so I can only guess that he's being praised by people who haven't read much literary fiction since high school.
Posted by Cary Watson at 8:57 AM