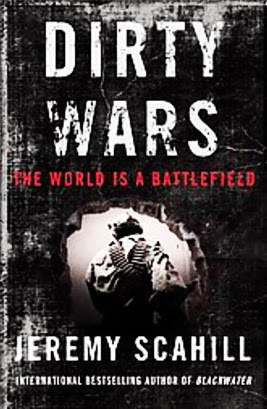 This is a meticulously researched history of the covert and clandestine wars waged by the US from the 2003 invasion of Iraq up to the present day. These "wars" consist almost entirely of drone strikes across the Middle East, and commando raids and assassinations carried out, well, just about anywhere. The targets of these strikes range from al Qaeda leaders to Taliban fighters to an American citizen, Anwar Awlaki, whose crime was to exercise his First Amendment rights in a way that was distressing to the US government.

I won't go into detail about the when and where of these raids because that's not what's important about this book. What Scahill shows in meticulous, savage detail is that over the course of just over a decade the national security-military complex in the US has turned itself into a counter-terrorist organization, which is not to be confused with anti-terrorism. The US, through the CIA, security contractors like Blackwater, and elite military units such as the SEALS and the Joint Special Operations Command, has become a de facto terrorist organization. These groups have become mirror images of al Qaeda and the like. They have a stated goal of combating terror by taking out the leaders of various militant groups, but the high number of collateral civilian deaths that occur thanks to these drone strikes and raids has made them terror organizations in the eyes of the affected populations. And like most terror groups, the America's bloody raids and targeted assassinations have done nothing except stiffen resistance, both politically and militarily. The best example Scahill gives of this is the case of Somalia. The al Qaeda presence in Somalia was minimal until the US launched a full-scale campaign of drone strikes and raids led by local warlords. The upshot of all this was a civil war in Somalia that was led by a coalition of Islamist groups, the very people the US doesn't want to see gaining power.

The case of Anwar Awlaki shows just how far down the road to rogue state status the US has gone. Awlaki was born in the States, raised partly in Yemen, and attended college back in the US. He became more "radicalized" and moved to Yemen where he became an online preacher of jihad against the US. Awlaki did himself no favours with his speeches, but his violent sermons were no more threatening than any number of things far-right, anti-government zealots have said within the US. Frightened by Awlaki's online popularity amongst militant Islamists, Obama's administration fabricated a legal justification for Awlaki to be defined as a terrorist and therefore a legitimate target for assassination. His rights to a fair trial as a US citizen never came into play. He was duly killed in a drone strike. The message sent by the Obama administration was that Americans can and will be murdered if they say the wrong thing and are also of the wrong ethnicity.

Putting aside the legal and moral problems (which are huge) created by America's terror campaign against its enemies, the US has created yet another problem for itself: it's actions establish a precedent for other nations to engage in similar extralegal and illegal actions. Why shouldn't China get pushy with its neighbors in the South China Sea? Who's to say Russia can't interfere in Georgia or Ukraine? Hey, North Korea, go ahead and shell a South Korean island! If the US wants to conduct its foreign affairs in the style of a bounty hunter from a spaghetti western, it shouldn't be surprised if the world fills up with competing gunslingers.