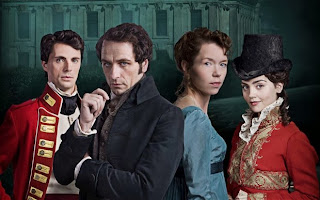 So here's the recipe for the BBC's adaptation of P. D. James' Death Comes to Pemberley:

2 cups The Antiques Roadshow
3 tbsp. The Great British Bake-Off
Zest from Pride and Prejudice
Juice from six medium-sized RADA actors
One whole plot from a cozy mystery (any author)

My subject isn't the BBC's fresh-out-of-the-oven Death Comes to Pemberley, which is a pleasant scone of a mini-series if your taste runs to scones, but rather why "nostalgia" TV only seems to exist on one side of the Atlantic.

British broadcasters, especially the BBC, have been producing historical/period dramas for a very long time. It may well one of the terms of their broadcasting licences. In the last ten years or so the rate at which these programs have been produced seems to have increased. Since 2003 the UK has sat down to watch period programs such as Lark Rise to Candleford, The Indian Doctor, Downton Abbey, Parade's End, Call the Midwife, Ripper Street,  and South Riding. Add to this a host of period literary adaptations (Emma, Great Expectations) plus a small army of tweedy sleuths such as Miss Marple and Father Brown, and you have nostalgia being produced on an industrial scale.

The nostalgia business is neither a good or bad phenomenon. British history and literature is extravagantly rich in stories and characters that cry out for a dramatic adaptation, so it's no surprise that producers simply look through their bookcases in order to find their next project, and there's certainly something worthy in a nation celebrating it's history and art. I'd also theorize that the recent spike in the Brit taste in yesteryear is due to the perception that their uniqueness is eroding in the face of immigration, globalization and integration into the larger European community. The British tabloids are full of fear-mongering stories about immigrants stealing jobs, committing crimes, and scrounging social benefits. Even respectable publications and commentators are still leery of the EU. Britain is, after all, the only EU member not to adopt the euro. The dark side to this fear of change, at least as it applies to the TV business, hit the headlines in 2011 when Brian True-May, one of the creators of the hugely successful TV series Midsomer Murders, said that the program didn't show "ethnic minorities" because it "wouldn't be an English village with them...We're the last bastion of Englishness and I want to keep it that way." As for globalization, I got a close-up look at how that process has affected the UK when I visited London in 2008. My first trips to London took place in the late '70s, and the London I found then pretty much matched my imaginative vision of the city of Dickens and Wodehouse. In 2008 I found a bigger version of Toronto; the stores, the buildings, everything had a North American look and feel. It was rather disappointing. So if on one level period TV drama in Britain is a celebration of history and culture, on another level it's a barometer of unease with social and cultural change.

The situation in North America is almost the complete opposite. With a few exceptions, history doesn't exist for American TV. Back in the '50s and '60s the TV schedule had lots of period programming in the form of westerns, but from the '70s to the present day it's hard to name a half-dozen prominent shows that were set in the past. There was a short-lived boom in historical mini-series that kicked off in 1977 with Roots, which was then followed by a variety of pulpy and popular productions such as Shogun and The Winds of War. But since then? Nothing really, unless you count Happy Days as a period piece. Mad Men and HBO series such as Deadwood are beloved by critics but they're far from being popular successes. Mad Men's most highly-rated episode attracted only 3.5 million viewers; a crap reality show like Duck Dynasty can easily draw more than twice as many viewers.

The US has a history every bit as varied and colorful as Britain, but it's not a subject of much interest to American broadcasters. One reason for this is that politics has become such a charged and divisive subject in the US that there's probably a reluctance to tackle historical issues that could be controversial. There's no controversy in showing US troops fighting bravely in The Pacific and Band of Brothers, but dramatizing something from the Civil War or the Depression or the American Revolution? Just imagine how Tea Party Republicans and Fox News would react if they felt there was a whiff of "liberal bias" in any examination of America's past. The other reason for the shortage of period shows on American TV is that the citizenry sees the here and now and the near future as being of far more interest. Part of America's self-image is that there's a better and brighter future just over the horizon for every citizen. It's an aspirational ideal that's naive and unrealistic, but it can be argued that it's better than living in the past. It's hard, though, to explain why American TV, including HBO and other niche cable channels, so rarely take the opportunity to adapt American literary classics for the small screen. Why no productions of anything by William Faulkner, Ernest Hemingway, Sinclair Lewis, John Updike, Henry James, Saul Bellow, Ray Bradbury, and a score of other writers? The BBC seems to film novels by Dickens and Austen on a regular rotation, but American's literary giants can't get a sniff at home. The BBC even had the audacity to film James Fenimore Cooper's The Last of the Mohicans in 1971.

So perhaps in the spirit of the "special relationship" and in light of the inevitability of globalization, the BBC and ITV can be tasked with bringing America's literature and history to the world. How about Newport Mansion from the producers of Downton Abbey? Or Ray Winstone starring as Flem Snopes in Faulkner's The Hamlet? And I definitely want to see the lads from Top Gear starring in an adaptation of Eugene O'Neill's The Iceman Cometh.

So true! Nostalgia just aint what it used to be. ;-)