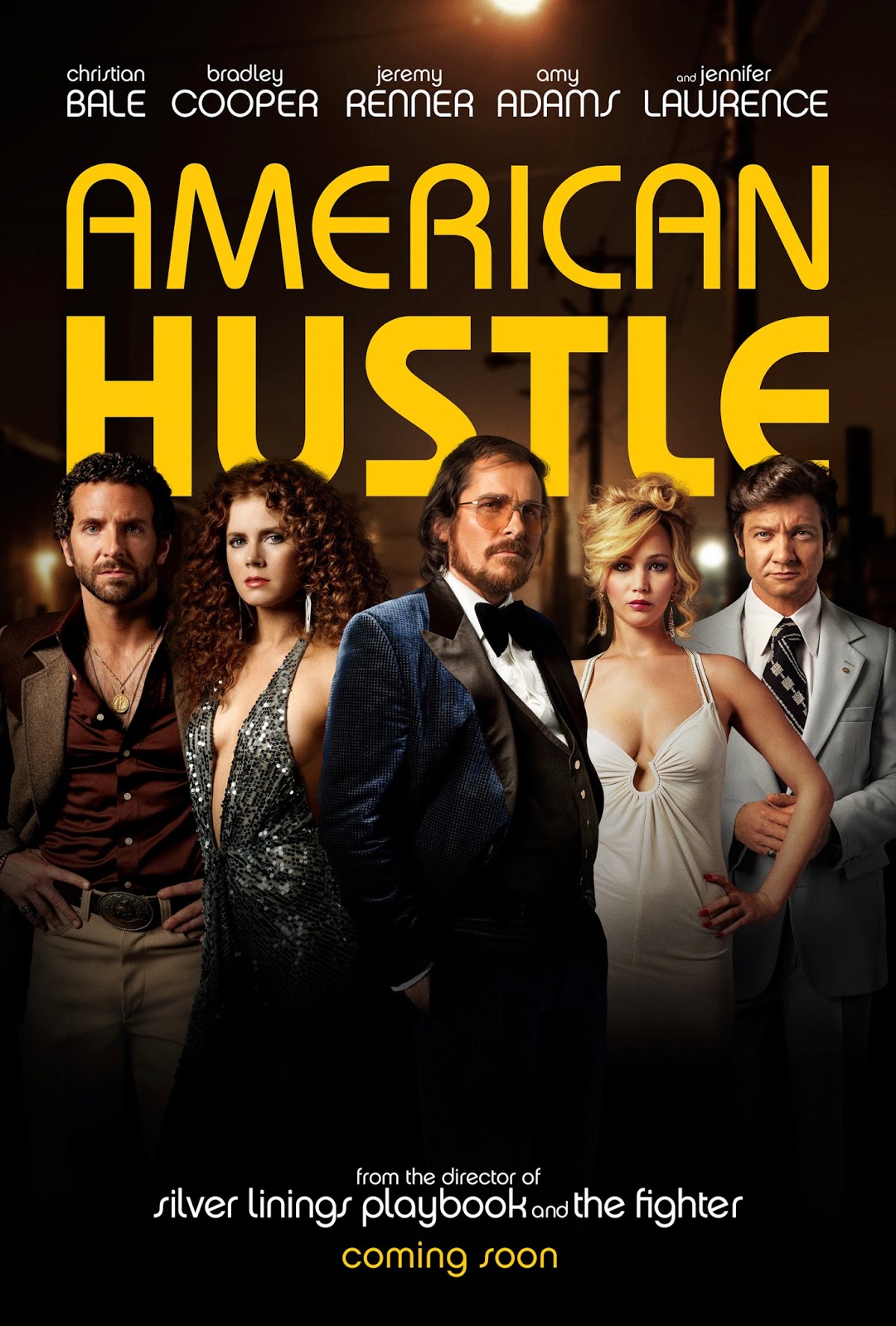 That American Hustle is being showered with accolades I can only attribute to the fact that the film leaves critics with a stark choice: call it the thunderingly dull turkey that it is, or knuckle under to the film's overblown, badly-written characters and its witless fascination with Seventies decor and fashion. Most critics have opted to go with the herd and applaud the film, possibly leery that they might be accused of not being able to appreciate director David O. Russell's ironic look at the con men and women who are often at the heart of the American Dream.

It's difficult to pick out the worst aspect of this film, but I think I'll put my money on the characters. The five main characters are resolutely dull, witless and shallow. The same could be said about a lot of the characters in Boogie Nights, another Seventies-themed film, but the huge difference is that the latter film actually likes and respects its characters, and works to make us feel the same way. Russell has no respect for his characters. He's laughing at them and wants us join in on the laughter by making them look and sound as ridiculous as possible. Bad hair! Wide lapels! Disco! Oh, the horror and hilarity! Every character, with the possible exception of Jeremy Renner's, is in the film to be mocked. Their ambitions, their beliefs, their lifestyles, everything about them is either sneered at or openly ridiculed. And yet this isn't a comedy. I saw it in a crowded cinema and you could have heard a pin drop throughout; no laughs, no giggles, maybe a few chuckles here and there. You really have to wonder what Russell's purpose was in making this film because its entertainment value is zero.

The plot is a shambolic retelling of the Abscam scandal, but most of the script is taken up with the dreary personal relationships and romantic entanglements of the main characters. This is where the acting might have saved the film, but, alas, not this time. There's some seriously bad acting going on here. Bradley Cooper and Amy Adams seem to think they're appearing in a telenovela, and Christian Bale casts a soporific pall over the film with his thick, chewy Bronx accent and sluggish...line...readings. Jennifer Lawrence emerges with her honour intact despite being lumbered with some of the worst dialogue, and Robert De Niro appears briefly to show everyone what a real pro can do. Unfortunately for Russell, De Niro's presence only reminds us that American Hustle is basically a ripoff of Goodfellas. In fact, if I was Martin Scorsese I'd be suing for plagiarism. Or maybe not. I wouldn't want people thinking that anything this bad could have been inspired by my film.
Posted by Cary Watson at 4:57 PM

But it did give my wife her new catchphrase, "Thank God for me."

I saw "Boogie Nights" at TIFF and Paul Thomas Anderson talked about how much he liked the characters. Even the scene where Julianne Moore tries to get her kids back and we all knew that was the last thing that should happen made us feel for her.

Another odd thing about "American Hustle" was the music. It was all off by five years or more. I wondered why, when the movie made such a big deal about building the scam, "from the feet up," it wouldn't have used late 70s cheesier music instead of the on-the-money stuff (Steely Dan's, "Dirty Work" pretty much describing the scene as it played).

The only really honest song was the Donna Summer and it's not on the soundtrack album.

Yes, the music just felt like a grab bag of '70s hits. Both Boogie Nights and Goodfellas did a far better job of integrating the music with the story.

Yes, they sure did. And Boogie Nights used the cheesy stuff so well, Sister Christian during the robbery...

Ha, now I've got to watch that movie again...

There's always someone conning the other, which can bring on a lot of confusion, as well as a whole bunch of fun, which makes this an absolute blast to check out. Good review Cary.

"American Hustle" is marginally entertaining, and ultimately not a satisfying movie-going experience.