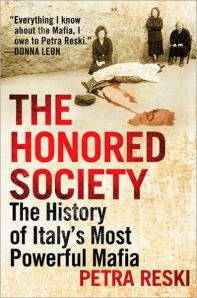 The impetus for this look at Italy's various Mafia organizations was the 2007 execution-style murder in Duisburg, Germany, of six Italians from Calabria. The six were part of the 'Ndrangheta, one of southern Italy's three great Mafia crime groups, the other two being the Camorra, based in Naples, and the Cosa Nostra, based in Sicily. The German public and police were shocked to find that the Mafia were engaging in turf wars outside of Italy, and German journalist Petra Reski's book is a sort of field guide to the environment the Mafia comes from and is supported by.

Reski structures her book something like a travelogue, as she and her friend Shoba, an award-winning photographer who's made a career photographing the world of the Mafia, traipse around southern Italy checking in on sites and individuals who are key to the recent history of the region's mafias. This isn't the most conventional or academic way to go about chronicling organized crime, and at times the book reads like a loosely-stitched together group of magazine articles, but it's a fascinating read and Reski has some intriguing insights into the Mafia's entrenched position in Italian politics and society.

One of the startling observations Reski makes is that the Catholic Church is a key spiritual component of the Mafia. Over here in North America we occasionally hear about brave anti-Mafia priests, or equally occasionally the Pope issues a statement decrying a Mafia atrocity, but the rank and file of priests in southern Italy are more than happy to provide mobsters with confession, baptisms, marriages, and all the other ceremonies held dear by Catholics. It's a symbiotic relationship. Mobsters value the way the Church has embraced them because it shows that they're not outcasts or apostates; they're still part of Italian society despite being murderers. The Church supports the Mob because it views it as being in opposition to the Italian state, which, in the Church's eyes, is sinfully secular. In short, the Catholic Church finds more to like in a cabal of killers than it does in a democratic state.

In the last thirty or so years one of the key tools in the fight against the Mafia has been the testimony of turncoat mafioso, from foot soldiers all the way up to capos. What's fascinating about these "traitors" is the way in which their families turn against them. Their wives, children and parents hold mock funerals for them, and generally make a great show of their hatred for anyone who betrays the Mafia. In this respect the Mafia comes across as a cult or religion. The loathing for Mafia turncoats is very real, and it has striking similarities to way in which religious fundamentalists of various stripes react to apostates.

After the Mafia's high-profile murders of public prosecutors Giovanni Falcone and Paolo Borsellino in 1992, the Italian government had a chance to really uproot the Mafia thanks to a groundswell of public outrage against the Mafia's contempt for the Italian state. For a few years the Mafia was on the run, but the rise of Silvio Berlusconi ended all that. He formed a partnership with the Mafia that gave him votes in the south, and the Mafia got a rollback of various anti-Mafia laws. The present situation is dire. The Mafia is now so embedded in Italian politics and finance that any attempt to remove it might, like cutting out a tumor, end up killing the patient. Simply put, Italy seems to have lost control of the southern half of the country, and any serious attempt to destroy the Mafia would cause so much economic/political disruption and dislocation that no ruling party is likely to risk undertaking such a campaign. This is an issue that concerns the EU as well, because significant chunks of the European economy are now controlled by the Mafia, and their growing financial muscle could seem them become a de facto member of the EU.

This isn't a book filled with colorful tales of Mafia shootouts and assassinations (alright, there are a few), but it is a wake-up call for anyone who thinks the Mafia is nothing more than a localized Italian problem. It's also a reminder that any capitalist organization, no matter how criminal, becomes immune to prosecution once it becomes large enough and powerful enough to get its hands on the levers of power. .