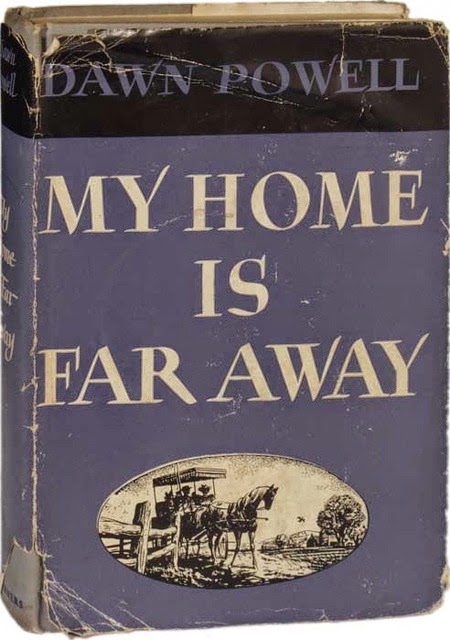 Dawn Powell is one of those authors who has received more fame, critical recognition, and sales in death than she ever did in life. Gore Vidal championed her work, and in the last fifteen or so years her novels have come back into print. Powell was born in 1896 in Ohio, and the subject matter of her novels is divided between studies of small town life in Ohio and witty glimpses into the lives of New York's bourgeois bohemians. I read one of her New York novels a few years ago and I can't say that it made much of an impression on me. It was well written, smart, but felt slightly insubstantial.

My Home Is Far Away is Powell's lightly fictionalized autobiography of her childhood in Ohio, and it's one of the best novels of its type I've ever come across. What suprised me the most about it was that it only sold four thousand copies on its initial release, which seems paltry for a novel that should be nipping at the heels of To Kill a Mockingbird for the title of best American coming-of-age novel, Female Division. But then I considered the year it came out and things began to make sense. America was at its patriotic apogee in 1944 and I doubt the reading public would have had much enthusiasm for a novel that put the boots to the Andy Hardy version of small town life that was currently popular.

The character who does the coming of age is Marcia Willard, the precocious five-year-old daughter of a traveling salesman, Harry, and his wife Daisy. Marcia has two sisters, Florrie, the youngest, and Lena, the eldest. The time is the early 1900s and the place is London Junction, Ohio. Harry is the archetypal traveling salesman who dresses sharp, loves to tell a joke, and has a high opinion of himself. The truth is that Harry neglects his loving family and spends money he doesn't have mostly on himself. Daisy and the children scrape by on his occasional largesse, store credit, selling their home baking, and the aid of relatives. Daisy dies suddenly and Harry remarries after farming out the children to relatives. Idah, his second wife, is a honours graduate of Cruel Stepmother College. Between her cruelty and Harry's indifference to the suffering of his children, the family eventually falls apart. The two eldest girls are now teenagers, and Lena moves out to live with an aunt. The novel ends with Marcia running away from home to Cleveland where she hopes to find a new life with some people who are no more than acquaintances.

My basic description of the novel makes it sound like a generic, melodramatic sob story. It isn't. Marcia and her sisters do suffer from abuse and neglect, but an equal amount of time is spent describing Marcia's joy in discovering all the colour and variety in the world around her. She and her sisters are, by and large, raised without a lot of supervision, and that opens up all kinds of worlds and adventures for the trio. They spend, for example, a delightful summer living on a relative's farm, and an extended stay living in a railroad hotel provides a learning experience of a very different kind. Powell crafts her characters with subtlety and feeling, and even the egregious Idah (Powell left her actual stepmother's name unchanged for the novel) seems less of a caricature thanks to the social environment we see her living in.

About that social environment; Powell's depiction of lower-middle-class life in the Midwest is revelatory and detailed. This is a society filled with casual and transient relationships between men and women. Many people marry, but there's often little love involved, but a great many financial considerations. Children are casually ignored, abused or cast-off depending on the financial health of the parents. And everyone is scrambling, with sharp elbows at the ready, to get ahead/advantage of the next guy, As a portrait of seedy, grasping, cynical, street-level capitalism this novel has few equals. This wasn't the sort of book that was going to be embraced in 1944, but now, seventy years later, Harry and Marcia Willard need to take their place beside Atticus and Scout.