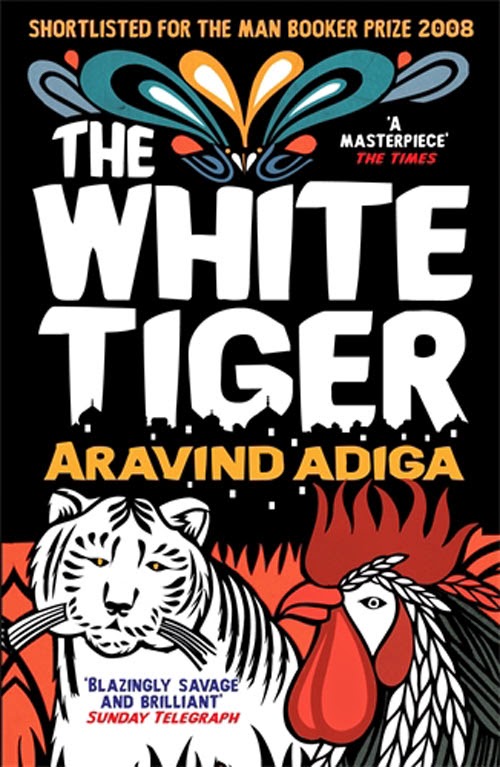 The White Tiger took the Man Booker prize in 2008, and I choose to believe that it won because the jury felt that they'd stupidly overlooked Sujit Saraf's similar, but much better, novel about modern India, The Peacock Throne (my review), which came out one year previously. Adiga's novel is very good, but it feels like an amuse-bouche appetizer before the high in protein main course of Saraf's book. But on with the review.

The white tiger of the title is Balram, once a peasant in deepest, darkest, most backward India, but now the owner of a fleet of cabs in Bangalore. The novel is written as a series of letters from Balram to the Chinese Premier, who is about to make a state visit to India. Balram feels that because he's climbed from the bottom rung of Indian society to somewhere near the middle, he's perfectly positioned to tell the Premier the truth about India. Balram does this by describing how, through luck and one fateful murder, he managed to reinvent himself as a successful businessman in India's capital of hi-tech..

The strength of The White Tiger (and this applies to almost every Indian novel I've read) is that it enthusiastically takes on subjects such as class conflict, the lives of the working poor, the cruelty of unfettered capitalism, and the corruption and viciousness of Indian politics. Modern Western novels rarely tackle subjects such as these, and working-class characters usually only make regular appearances in crime fiction, most often as perps or victims. The White Tiger is not a dire or dreary examination of hard times in India. Adiga, like his Indian peers, uses wit to make the basic horror of Balram's story palatable. Balram is a consistently amusing narrator even as he's describing the noxious nature of village life, or the demeaning and dehumanizing details of master-servant relationships.

Where this novel didn't work for me was in the character of Balram. He's entertaining, but he's also too much of a fictional artifice. The idea that Balram would write letters to the Chinese Premier works well as a comical, but very artificial, narrative device, but that also ends up applying to Balram; he never feels like more than a deftly-handled, but weightless, comic character who wouldn't exist outside the pages of the book. The same problem, to a far worse extent, handicapped Monica Ali's Brick Lane, set in London's South Asian community, which was shortlisted for the Man Booker in 2003 . And Adiga isn't always consistent with his character: one minute Balram is presented as woefully ignorant and the next he's using a word like "oleaginous."

I'm still recommending The White Tiger, but its issues and themes have been handled better and more imaginatively in The Peacock Throne and, more recently, by Manu Joseph in Serious Men (my review). Finally, it's interesting that Brick Lane and The White Tiger both gained Man Booker approval with stories featuring male South Asian characters who are somewhat absurd and/or laughably naive. The more realistic characters of Saraf and Joseph don't seem to fit Western tastes.