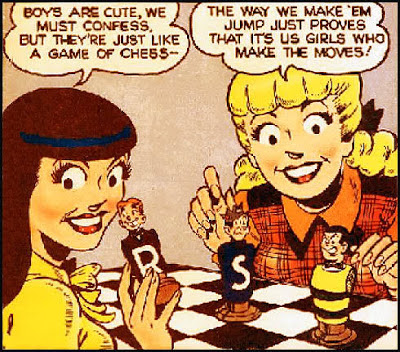 When I was a kid my least favourite comic book was Archie. From my point of view it was strictly for girls and it couldn't even claim to be funny. Fast forward to seven years ago when I began working at the library. To my amazement, Archie comics were still around. I had figured that the Archie universe of malt shops, roadsters, proms, and Archie's frankly bizarre relationship with Betty and Veronica would seem hopelessly out-of-date and unappealing to 21st century teens. Not so fast, Jughead. It turns out that kids and teens are still fascinated by the denizens of Riverdale, USA.

And here's the interesting part: in my neck of the woods some of the most avid readers of Archie are Muslim girls, especially the ones swathed in chadors and hijabs. At first blush this might seem odd. How can they relate to two female characters, Betty and Veronica, whose lives revolve around dating and clothes shopping, and who feel free to kiss any boy, any time? No psychology degree required to deduce that Archie serves a wish fulfillment function for these kids. The personal freedoms enjoyed by Betty and Veronica are clearly something these girls covet and dream about. The girls are also reading the usual variety of teen lit titles, especially the ones featuring teenagers with supernatural powers.

You don't have to throw a stone very far before hitting a right-wing politician or commentator who rails against immigrant Muslims for failing to integrate, for not adopting Western standards of dress and behavior. That might be true of some Muslims, but that only makes them like every other group of immigrants. Past a certain age, say thirty, we all become old dogs who are too reluctant or too lazy to learn new tricks. It's the kids who adapt and integrate. The popularity of Archie in the Canadian teen Muslim demographic would be just a cultural oddity if it didn't also point out how strongly young immigrants of all varieties want to participate in North American culture.

And now enter a time machine with me and journey back to Toronto in the late 1960s, a time when the city's most visible and numerous immigrant group was Italians. To we WASPy Torontonians, Italians were a strange race, indeed. We tsk-tsked at their large families; snickered at the shapeless, form-disguising black dresses worn by their women; mocked their accents; and most of all we fulminated about their inability to become Canadian, to speak English instead of that ridiculous language of theirs. From a WASP point of view in the '60s it didn't seem Italians would ever be "Canadian." It's at this point that the "the more things change..." cliche comes into play.

Having grown up in Toronto and seen it become one of the most multicultural cities in the world, it's dead obvious that immigrants of all varieties eventually integrate. Some immigrant groups manage the transition quickly, some do it over the course of a couple of generations. But they've all done it. And judging by the hunger Muslim girls have for Western grrl power literature and comics, their female children or grandchildren will one day be acting like Betty and Veronica instead of just reading about them.

I'll close with a story about the way in which integration can even find its way back to the "old country." I went to university with an Italian girl (I'll call her Sophia) who once told me about the time in the mid-1970s when she and her sisters, all teens, spent a summer in her family's town of origin in southern Italy. Her female teenage relatives in the town noticed that she and her sisters shaved their armpits. Sophia was pointedly told by these girls that only whores shaved their armpits. By the time Sophia and her sisters left for Canada, those same girls had started shaving.

Sophia's story neatly reveals how cultural values can backwash into an immigrant's country of origin through family relationships and friendships. So I wonder what seeds are planted when a girl in India or Pakistan or Iran is given a gift of secondhand Archie comics by a relative in Canada? What does she think when she sees Archie kissing an African-American girl? How does she react to Kevin Keller, Archie's openly gay friend? And what on Earth does she make of Betty and Veronica publicly flirting with boy after boy? I'm not saying that the world of Archie & Co. is an aggressive agent of cultural revolution, but in its depiction of teens living their lives unfettered by ancient tradition, ironclad gender stereotypes, and ruthless social prohibitions, the kids of Riverdale are presenting a seductive picture of a world largely defined by the choices and beliefs of individuals. There's nothing very revolutionary in that picture when viewed from North America, but in the right household, in the right country, it could tilt, even in a small way, the axis of someone's world.
Posted by Cary Watson at 11:48 AM