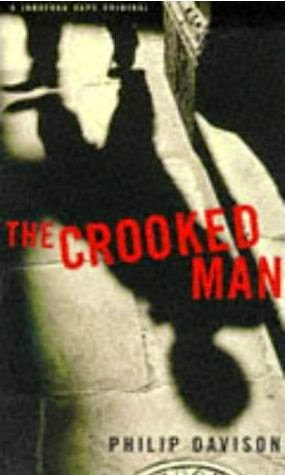 In one of his blog posts, spy novelist/critic Jeremy Duns neatly divided espionage novels into two camps: desk work and field work. A desk-work spy novel is all about spymasters trying to sniff out moles, turn enemy agents into defectors, and divine what the other guy is up to and then frustrate his plans. It's a cerebral genre, and John Le Carre would be the poster boy for it. A field-work novel follows agents at the pointy end of the espionage stick: surveillance, assassinations, dead drops, car chases, shootouts, and having sex with implausibly-named women if your name is James Bond.

The Crooked Man is very much a field-work spy novel. The crooked man of the title is Harry Fairfield, a lowly odd-jobs man for a sub-section of MI5. Harry doesn't even rate an official position, he's simply paid on a per job basis by Hamilton, his ruthless MI5 boss. Hamilton is one of those oh-so-English spies with an Eton tie who can use the word "quite" as a weapon and who refers to his hitmen as "chaps." Fairfield is what Len Deighton's Harry Palmer character (he was only given this name in the films made from Deighton's novels) might have become if he'd succumbed to booze, gambling and the moral brutality of his job. Fairfield is a bit a wreck, hating himself and what he does despite being rather good at it. He's used by Hamilton as an occasional minder for senior politicians, a burglar, and sometimes as an enforcer.

This is a slim novel, but Davison packs a lot of plot into it. The action shifts from London to Dublin to Bosnia, and Harry finds himself at the centre of several murders, including one committed by a cabinet minister that needs to be covered up by MI5. The plotting is excellent, but what makes Davison stand out from the herd is the quality of his writing. Here's a snippet from a scene where Harry KOs a man sent by Hamilton to search his flat:

He groaned and let out a nauseous whine. His eyes focused on me momentarily, then on the picture cord that bound him.
"What have you done?" he asked painfully.
"I've waited patiently," I replied
"You hit me...you..."
"Oh, I did," I confirmed.
"What did you hit me with?" he demanded with the same pain evident in his voice.
"With conviction," I said assuredly. "What's your name?" I asked.
He wasn't going to tell me.
"A first name will do."
He had a tic in one eye that made want to slap his face.
"Winston. I'll call you Winston."
No response.
"Winston," I said, "these days there's a lack of social cohesion that makes it increasingly difficult for us all to decide what we mean to each other...wouldn't you agree?"
He sneered. I slapped his face hard. He agreed there was a lack of social cohesion.

Davison's dry, acidic prose is wonderful, and there was one particular line that stuck in my mind (but I can't find now) that describes a character as bringing their problems with them like "a kite on a short string." Fairfield isn't only a hardboiled quipster. The backbone of the novel is his moral struggle with his crimes of omission and commission. Fairfield has intense feelings of guilt, and even tries to atone for his sins, which is pretty much unheard of in spy fiction. In this regard Davison is a thematic cousin to Graham Greene, but for my money Davison is the better writer. There are three more Fielding novels after this one, but they seem to be out of print. So here's me off to the used book stores.
Posted by Cary Watson at 3:12 PM