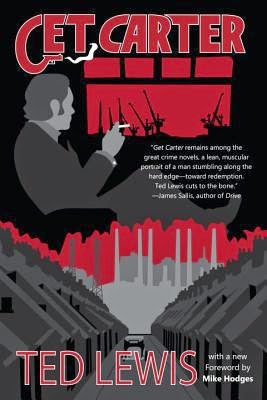 Get Carter is hands down the most iconic British gangster film of all time, and it's arguably the most memorable role of Michael Caine's career. It's odd, then, that it took so long for a publisher to reissue the novel it was based on. The original novel was called Jack's Return Home, which is an accurate, if underwhelming, description of the contents therein. And now the eternal question: which is better, the book or the film? The answer is that this one of the rare cases where the book and film are equally superb.

For the few people unfamiliar with the film or the book, the story follows London hood Jack Carter as he returns to his hometown, an industrial town in the north of England, for the funeral of his brother Frank. Jack suspects that Frank's death in a car crash wasn't accidental, and he's soon putting the hurt on various people to try and find out the truth. The local gangsters and Jack's bosses in London don't like that Jack is ruffling feathers and breaking heads, and decide it would be better if he was dead.

The novel has not aged one bit. The plot is tight and tense, but what really stands out is Lewis' dyspeptic prose. Here's his description of the patrons at a pretentious club/casino:

Inside, the decor was pure British B-feature except with better lighting. The clientele thought they were select. They were farmers, garage proprietors, owners of chains of cafes, electrical contractors, builders, quarry owners; the new Gentry. And occasionally, thought never with them, their terrible off-spring. The Sprite drivers with the accents not quite right, but ten times more like it than their parents, with their suede boots and their houndstooth jackets and their ex-grammar school girlfriends from the semi-detached trying for the accent, indulging in a bit of finger pie on Saturdays after the halves of pressure beer at the Old Black Swan, in the hope that the finger pie will accelerate the dreams of the Rover for him and the mini for her and the modern bungalow, a farmhouse style place, not too far from the Leeds Motorway for the Friday shopping.

Throughout the novel Lewis applies an acid wash to English society; more specifically, the culture and environment of ugly, money-obsessed, industrial towns in the North. Sometimes the novel reads like hate literature about northern England, but certain other (brief) passages are tinged with Jack's nostalgia for childhood outings with his brother in the countryside around the town. There's a sense in the novel that a more civilized, less mean-spirited England once existed but has now been consumed by a cabal of gangsters, bent coppers, avaricious politicians, and a middle-class obsessed with climbing the social ladder. The spirit of this older, better England is personified by Jack's brother. Frank is dead when the novel begins, but in a brilliant bit of writing Lewis lets us know all about him with a description of the contents of his living room bookcase; his tastes in magazines, books and music are an eloquent testimony to a sober, decent character who was too good and too old-fashioned for his place and time. As Jack investigates Frank's death it becomes even more clear that he was the odd man out in a town given over to self-interest and viciousness, and Jack's attempt to solve and avenge Frank's murder becomes an attempt to reclaim some small part of the innocence he once shared with his brother.

The literary step-parents of Get Carter are Alan Sillitoe and Harold Pinter. Jack's misanthropic descriptions of the town are an echo of the anger Sillitoe brought to his novels and short stories set in the north. Sillitoe had more sympathy for his characters, trapped as they were in dead end jobs and dreary housing estates, and he was more concerned with showing the social and political facts that produced depressed lives and dreary communities. Get Carter's terse, elliptical, and allusive dialogue is pure Pinter. Jack's chats with his fellow gangsters usually have a neutral and pleasant tone but underneath it all they're straining to express violence, rage and naked threats. It's a unique way to create tension, and it's a device that was developed further by Brit crime writer Bill James in his long-running Harpur & Iles series.

So, how far does the book differ from the film, you ask? Not that much, really. The plot was streamlined for the film, and scriptwriter/director Mike Hodges did a wonderful job of choosing what to cut and compress. In a few places the film actually does a better job than the novel; Jack's famous line in the film when he meets Cliff Brumby ("You're a big man, but you're in bad shape. With me it's a full time job. Now behave yourself") is a tweaked improvement over the dialogue from the book. Hodges also made a wise decision to tone down some of the violence aimed at the female characters. Ted Lewis wrote two other Jack Carter novels, Jack Carter's Law and Jack Carter and the Mafia Pigeon, both of which are also being reissued.

This is one film that will always have a following.