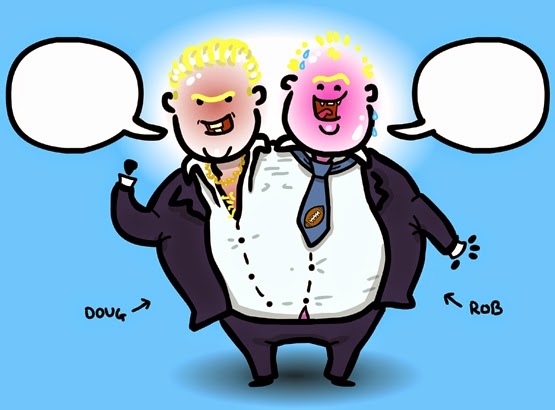 If at some point late in the evening of October 27 you noticed a sudden wind stirring the tree branches outside your house, that was the result of Toronto's population collectively releasing its breath after the defeat of Doug Ford in the mayoral election. The pollsters all predicted it, but even the faint chance that they might be wrong had the city on edge as though fearing an impending natural disaster. Doug and Rob Ford have been the two-headed kaiju of Toronto politics, but now that they've been sent back to Monster Island, it's time to look at some of the hard lessons Toronto's learned from the election.

Toronto's media scratched its head raw trying to figure out why Doug and Rob could consistently draw the support of up to a third of the electorate despite spouting a string of racial, ethnic and religious slurs. What seemed even stranger was that the Fords had solid support from Toronto's visible minorities. I think the media was trapped in the idea that prejudice is the exclusive preserve of whites. If you've spent any time in public service, or taken a lot of cab rides, you quickly learn that a segment of every race, ethnic group, and religion has a bad word for the other guy. When the Fords vocalized their prejudices they appealed to anyone who's worldview is filled with stereotypes and bigotry. A portion of our population, no matter what its racial or ethnic origin, saw in the Fords people who share their prejudiced view of the world.

Full disclosure: I was an Olivia Chow supporter. It was clear several weeks before the election that Chow was going to finish a distant third, a remarkable failure on her part given that she began the year as an overwhelming favourite. So what happened? The first problem was that Chow has spent her political life in the cozy bourgeois-bohemian confines of wards and ridings in downtown Toronto. At the ward or riding level you can get elected by going door-to-door, speaking to community groups, and generally doing a lot of one-on-one political work. Trained in this environment, Chow thought that simply articulating her policies was a sensible campaign strategy. That's not what elections on the big stage are about. People want to vote for someone who exudes confidence, determination, empathy, and a certain single-mindedness. Chow didn't offer that. She came across as a well-meaning senior civil servant who was tasked with explaining rules and regulations to her juniors. She had to sell herself as a leader and she failed completely. What was worse was that Chow began to campaign defensively with a series of self-deprecating remarks about her accent, her speaking style, and her insistence on sticking to discussions of policy. Her supporters got in on the act and started muttering that criticism of Olivia's campaigning style was veiled sexism, that being aggressive and loud was a male view of how to run for office. That argument didn't wash. Kathleen Wynne just won a provincial election quite handily without being aggressive or shouty, and she had a lot of political baggage to overcome. The simple answer for Chow's failure was that she didn't understand that an election campaign is about selling yourself rather than putting forward an agenda, and she sent the message that she had little faith in what she was selling.

TV News and Talk Radio is an Enabler

Throughout the Ford saga, the Toronto Star and, to lesser extent, the Globe and Mail, have proven over and over again that print journalism matters. They broke story after story about the Fords' crimes and misdemeanors, but all their good work was almost undone by local TV news and talk radio. Most people get their news from TV, and they were ill-served by the local talking heads. TV news twists itself into knots trying to present "balanced" coverage, and that meant the Fords could get coverage of their staged media events without analysis or context. TV news relies on an older demographic, a group that also happens to be key Ford supporters, and it seems obvious that they went out of their way to avoid alienating their audience with critical Ford coverage. Talk radio skews even older, and stations like 1010 were right behind the Fords, up to and including giving them their own show. You could almost include the Toronto Sun newspaper as part of talk radio because their advocacy for the Fords was so blatant any claims they had to being a news organization became risible. They were propagandists, plain and simple.

Call it Canadian politeness, but we don't seem able to call a spade a spade. The Fords spouted lies the way a volcano spews ash, but I don't think I ever heard Chow, Tory or a reporter interviewing a Ford call them liars. Lying is the oxygen on Planet Ford, and without it they didn't really have a campaign or even a platform. Chow and Tory had multiple opportunities in debates and speeches to point out this fact out but something--fear of sounding rude?--stopped them. And why couldn't one of them have drawn attention to the Globe's story that Doug Ford was once a hash dealer? It's hard to imagine an American or British politician being given a free pass on that accusation by his opponents, but that's what Ford and Chow did.

What's the Matter with Kansas?

That's the title of a book by Thomas Frank that attempted to explain why poor and working-class Americans in red states support the Republican Party, something that clearly goes against their economic interests. The same phenomenon took place in Toronto. The poor and working poor flocked to the Fords, a pair of millionaires who want to slash city services, and snubbed Chow, the theoretical socialist. I say theoretical because Chow worked hard to make people forget her NDP roots. Late in the campaign, as her poll numbers collapsed, she began to call herself a progressive, but it was too late. Ford's demographic should have been hers, but like too many Canadian leftists she decided to chase the middle-class and ended up on the outside looking in. The Fords appeals to the poor, which consisted entirely of meaningless photo ops, was monstrously hypocritical, but it worked because they were the only ones making specific appeals to that group; the working-class was rewarding the Fords for having the courtesy to pay some attention to them.

Cops and Capitalists United in Impotence

During Rob Ford's time in the mayor's office he committed multiple crimes, including drug possession, impaired driving, and child (his own) endangerment. The police were tailing Ford off and on for months, and were very likely aware of these crimes as they happened, and certainly knew about them once they hit the newspapers. They took no action, except for mumbling excuses about "ongoing investigations." The city's business leaders were silent about the buffoon savaging Toronto's reputation around the world. In fact, many people in the business community (take a bow, Toronto realtors) were happy to have a mayor who woke up every morning with the words "Tax cuts!" on his lips. Ford's mayoralty was a clear, cold lesson that political power, even if it's wielded by an idiot, provides a moral Teflon-coating, especially when the idiot is singing from the right-wing hymnbook.


John Tory is the new mayor, and while he's highly unlikely to go on a crack-fueled rampage (he seems like more of a milk and Graham crackers guy), he's conservative to the tips of his Bass loafers and just as likely as Rob to try and cut city services. He'll do it politely, but his CV suggests that politically he and Ford have everything in common except recreational drug use. Here endeth the lesson.
Posted by Cary Watson at 8:45 PM