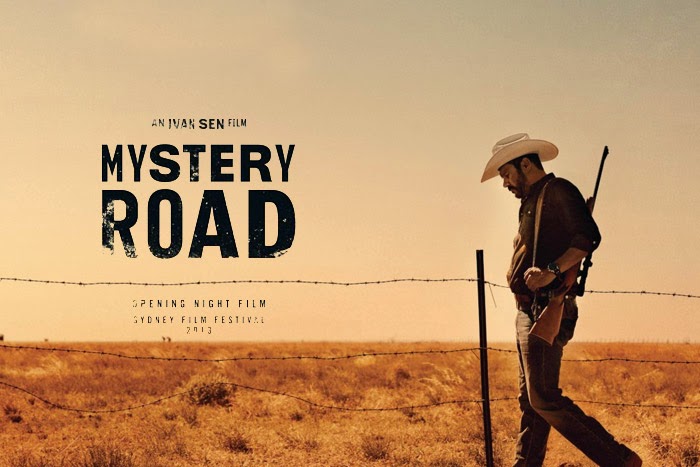 There are lots of things to like about the look of this Australian mystery-thriller, but the strong visual elements paper over a threadbare plot and characters who seem to have been developed on an Etch-A-Sketch. The story takes place in a small community in one of the most Outbacky-looking parts of the Outback, and that means we're treated to a full share of limitless vistas, glorious sunrises and sunsets, and shots of people dwarfed by desiccated, yet epic, landscapes. That's all well and good, but  the Outback, like the Alps or the Hawaiian Islands, is one of nature's visual wonders, and any half-decent cinematographer should be able to find some eye candy in those locations.

The mystery at the heart of Mystery Road is the murder of an aboriginal girl just outside of town beside a highway used by big-rig truckers. The investigating detective is Jay Swan, part aborigine, and recently returned to his hometown from a stint working in the big city. If Jay had seen his share of mysteries set in small towns in which outsider cops figure, he'd have been prepared for the cold shoulder he receives from all and sundry. He's disliked and distrusted by the all-white police force, and equally scorned by the local aborigines because he's working for the white authorities. Oh no, he's a man caught between two cultures! This aspect of film isn't done with any originality, except in the visual realm. Jay's dealings with these two communities are filled with a palpable physical tension. The people he talks to and/or questions lean away from him, look to one side, or otherwise convey through their movements and posture their utter disdain for Jay. It's a smart and visual way to convey information without resorting to dialogue.

The weakest part of the film is the mystery. Striking shots of the Outback don't make up for a plot that wanders off in various directions at a very slow pace, and then leaves us almost completely in the dark as to what happened to whom and why. Fortunately, the film ends with one absolutely terrific action sequence that plays out over vast distances. An added bonus is the work of actor Aaron Pedersen in the role of Jay Swan. He has a strong, Russell Crowe-like physical presence that makes him the centre of visual attention even if he's just standing or sitting.
Posted by Cary Watson at 11:24 PM

They were relying heavily on the scenery to sell the film.