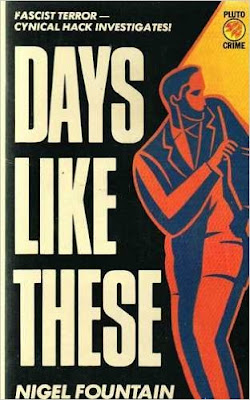 The left-wing thriller has always been a rare animal. Eric Ambler started the sub-genre in the late 1930s with novels like Journey Into Fear. After the war Ambler's enthusiasm for communists in the role of heroes cooled, but not his hatred of fascism and dictators. The vast majority of thrillers, if they have any political content at all, are usually right-wing or, more commonly, take a cynical, all sides are rotten and corrupt view of the world. The few writers who continued the leftist tradition (in English) included Julian Rathbone and John Fullerton. Rathbone eventually gave up thrillers and Fullerton (my review of This Green Land) is almost totally forgotten.

Days Like These is very much from the Ambler school of thriller writing. Ambler's protagonists are almost always middle-class Britons, politically naive, who find themselves caught up in conspiracies and plots that both baffle and frighten them. An Ambler hero has to muddle his way through danger, aided only by luck, pluck, and the timely intervention of a savvy leftist with a gun. The lead character in Days Like These is John Raven, an intermittently employed journalist in London who was once a committed lefty but is now content to drift around the edges of the movement. John is leading a quiet life of floating from odd job to pub to bedsit and back again, until he has the bad luck to buy some odd photographs and also witness the bombing of a politician's house. The two events are connected, and John is soon the focus of thugs and a nascent fascist conspiracy.

If the overall structure of the novel is Ambleresque, the tone and style owes more to Evelyn Waugh. This is as much a bleakly comic novel as it is a thriller, and Fountain takes great delight in describing the petty squabbles and bickering that constantly divides and sub-divides his characters on the left. The comic nature of the novel becomes even more apparent at the end when Raven becomes a hidden witness to a fascist conspiracy crumbling into internecine bloodletting. In fact, Raven ends up not having a much or any effect on the plot. He accidentally becomes aware of a right-wing conspiracy (it's a rather shambolic conspiracy) and spends the rest of the novel evading the bad guys until they eventually self-destruct. It's not a traditional thriller structure, but something about it reminded me of Evelyn Waugh's Scoop. Unlike Waugh, however, Fountain's sympathies are definitely on the left. His leftists may at times be absurdly idealistic, petty, doctrinaire and quick to anger, but they are not bloodthirsty or ignorant.

Fountain is an excellent writer. His descriptions of the demi-monde of left-wing London are richly detailed and quietly comic. Everyone seems to have one eye on the next deviation in political orthodoxy and the other on who's due to stand the next round. And London itself is presented as a seedy, frayed city of drab pubs, ratty apartments, and littered streets. This makes the novel sound bleak, but the vivacity of the characters and Raven's cynical, time-for-another-pint charm more than make up for the tatty surroundings. Days Like These isn't going to fit with most people's idea of a thriller, but excellent writing doesn't need to sit squarely in a genre box. My main problem with the book is that it's the only thriller Fountain wrote. If he does write another I'll gladly stand him several rounds in his favourite questionable pub.