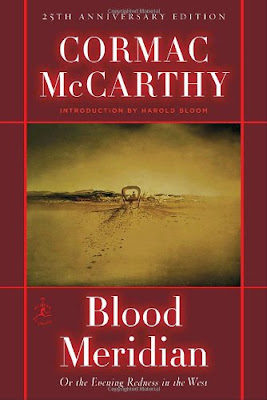 The first Cormac McCarthy novel I read was Cities of the Plain, and it's fair to say that I found it comprehensively bad. "But no!" people said. "That's the wrong one to start with. You should have read Blood Meridian!" There's a small group of writers I've read over the years that have elicited the same sort of response from friends and acquaintances. I tell someone I've read novel x by Ernest Hemingway/Graham Greene/Thomas Pynchon and not been impressed, and I'm then immediately told I read the wrong one--I should have read For Whom the Bell Tolls/Brighton Rock/Gravity's Rainbow. There seems to be a category of authors who are guaranteed to disappoint the reader unless you know how to tiptoe through his or her literary minefield.

Long story short, I gave McCarthy another chance. It was a qualified failure. Blood Meridian is widely regarded as his best novel, and is frequently mentioned as one of the great novels of modern American literature. I'll start with the good. Unlike Cities of the Plain and its dry, tone deaf prose, this novel features some superb descriptive writing. The novel follows a group of rapacious gunslingers called the Glanton gang on an odyssey through Texas, Mexico and the American Southwest as they hunt Apaches for a bounty on their scalps. McCarthy's descriptions of the land, the weather, and the hardscrabble towns the gang pass through are magnificent. His masterful way with metaphors and similes is astounding, and the novel can be enjoyed (partially) as an epic prose poem about the Old West.

Unfortunately, great description does not a novel make. It helps to have compelling characters, and McCarthy can't create characters if his life depended on it. All his cowboys comes from a big bin marked "Western extra type B: laconic." The Glanton crew are an undifferentiated mass of slow-talking cowpokes who sound as though they're in a western film rather than a western novel. The only exception is Judge Holden, who is given paragraph after paragraph of opaque, overripe, rambling dialogue about life and death and fate. It's pretty silly stuff, and feels like a misguided attempt to ape some of William Faulkner's characters, the ones who muse on existence and metaphysics while out on quail hunting trips. Holden is more symbol than man, and just in case the reader doesn't get this, McCarthy makes him exceedingly tall, completely hairless, white as a ghost, and exceptionally cruel. I'm surprised McCarthy stopped short of giving him a tattoo reading "Evil Incarnate." Holden is to be regarded, I'm guessing, as either a cruel god, a playful demon, or Death itself. He's so overdrawn, however, that he ends up in the same camp as cartoon horrors such as Freddy Kruger, Hannibal Lecter, and the better-quality Bond villains.

The plot is somewhere between thin and threadbare. The gang roams across the west killing just about every man, woman, child and animal they encounter. In-between massacres, atrocities and isolated killings, the boys get drunk, shoot up towns, and rob and rape. It's all a bit lather, rinse, repeat. If you were to stop reading it after about a hundred pages the only thing of interest you'd be missing is more prose poetry. The violence is unrelenting and, in the end, tedious. It doesn't add to our understanding of the barely-there characters, and the various bloody events read like scenes culled from McCarthy's favourite western films. In fact, one brief scene feels like a direct steal from The Good, the Bad and the Ugly.

The farther I got into Blood Meridian, the more I realized that Phillipp Meyer's 2013 novel The Son is a kind of rebuttal to McCarthy's book. Meyer's western novel tackles some of the same themes, even has an ultra-violent Holden-like character, but spreads itself over a much larger canvas with more imagination and skill, and, perhaps most strikingly, features native American and Mexican characters who aren't just cannon fodder for Yankee guns. And as it happens, I wouldn't recommend reading Meyer's first novel, American Rust (2009). It's the wrong one to start with.
Posted by Cary Watson at 10:13 PM

Email ThisBlogThis!Share to TwitterShare to FacebookShare to Pinterest
Labels: Cormac McCarthy, Philipp Meyer, The Good the Bad and the Ugly, The Son, William Faulkner