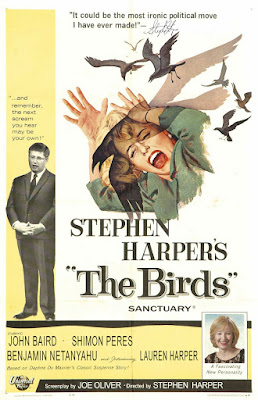 Now, bear with me because I'm going to be practicing psychology without a licence for the duration of this blog post. What unites the aforementioned dramatis personae, aside from politics, is their sheer oddness. A kind of weirdness that was best described by Charles Portis in his brilliant comic novel Masters of Atlantis, about a ludicrous only-in-America cult:

Through a friend at the big Chicago marketing firm of Targeted Sales, Inc., he got his hands on a mailing list titled Odd Birds of Illinois and Indiana, which, by no means exhaustive, contained the names of some seven hundred men who ordered strange merchandise through the mail, went to court often, wrote letters to the editor, wore unusual headgear, kept rooms that were filled with rocks or old newspapers. In short, independent thinkers who might be more receptive to the Atlantean lore than the general run of men.

Yes, that pretty much describes the people circling in Harper's orbit, except that they aren't as harmless or humorous as Portis' creations. Reading through the bios and newspaper profiles of these assorted Conservatives leaves one with the clear impression that this bunch (including Harper) is made up entirely of social misfits, loners, psychopaths and religious fanatics. One thing they almost all have in common is that they attached themselves to conservative politics with limpet-like determination as teenagers. While the rest of us were out drinking, partying, chasing the opposite sex, or just goofing around in various nerdy ways, Harper's odd birds were canvassing for rightist candidates, campaigning for student president, and generally marking themselves out as people no one wanted to hang with. Call me a libertine, but there's something scary/sad/suspicious about a teen who embraces politics with steely determination to the exclusion of sex, drugs and rock 'n roll.

Harper's flock are determined loners. With the exception of Hamilton and Giorno, all of them are single. Patrick Brown, the new leader of Ontario's Progressive Conservatives and once an MP in Harper's government, has said that he hasn't "had much time for that". The "that" in question is a relationship. It's telling that Brown can't bring himself to use words like "marriage" or "girlfriend.", and as a Conservative it's too much to expect him to admit to wanting a boyfriend.  It's slightly disturbing that so many of Harper's inner circle are unable or unwilling to form long-term relationships, although it's also possible that some of them, as rumor would have it, are deeply-closeted and simply don't want to upset Harper's socially-conservative base. Ray Novak, currently Harper's chief of staff, is the poster boy for social self-denial. He actually moved in with Harper and his family for four years and became a sort of uncle or brother to the Harper family.

As a substitute for personal, intimate relationships, this crew has opted for dog-like devotion to Harper and the cause of conservatism. Their bios are littered with references to their selfless, tireless, continuous efforts to promote and sustain the Conservative party and conservative causes. If they weren't working for the party directly they were laboring for right-wing advocacy groups or think tanks. None of them seem to have taken a breath of air in a non-political environment. The only break some of them take from political fanaticism is to indulge in some religious fanaticism. Wright and Giorno are staunch Catholics, and Hamilton and Harper are from the evangelical side of the spectrum. This religiosity wouldn't be remarkable for a random group of US politicians, but in Canada it gives them "odd bird" status.

Harper is notoriously uncomfortable around other people, even his own children, and this election campaign has seen him fence himself off from any kind of human contact that hasn't been thoroughly vetted. But this kind of anti-social activity pales next to Arthur Hamilton, who in an interview with the Globe and Mail basically said that the only thing that keeps his sociopathy in check are his fundamentalist Christian beliefs. And what's with the all the running? Wright gets up before dawn every morning, every morning, and runs 20km. Novak gets up at 5 a.m. to run, although his jogs are evidently shorter in length. These regimens smack more of self-flagellation than of fitness.

This leads me to the big question: why has Canadian conservatism attracted, or turned to, so many apparent head cases? The answer comes in a study done of incompetent military commanders done by psychologist Norman F. Dixon. He writes:

Dixon is writing about military commanders, but his analysis applies equally well to many right wing politicians (who are almost always militarists as well) and especially to Harper & Co. Stephen and his covey of odd birds use conservatism, of both the political and religious variety, to assuage and hide some aspects of their personalities they'd rather not face. Self-esteem, or the lack of it, is at the root of what attracts this bunch to conservatism. Brown had a painful childhood stutter, Wright was adopted, Hamilton has a dark, violent secret in his past, and several others appear to have spent their lives terrified of coming out. It's an absolute Las Vegas buffet of self-esteem issues.

Over the last several decades conservatism has become more militaristic, xenophobic, intolerant of cultural differences, doctrinaire, religious, scornful of economic underclasses, and hostile to criticism and analysis. These qualities give strength to people whose perceive their own identity as being weak or uncertain. Today's conservatism trades in simplistic certainties backed with macho bluster, religious pieties, martial rhetoric, and facile, pitiless economic logic. It's a movement that gives strength and purpose and confidence to those who can't find these qualities in themselves.