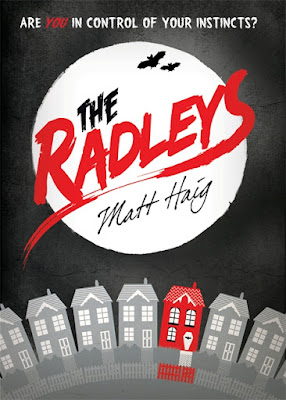 Vampires; can't live with 'em, can't live without 'em. Vampirism in literature and film is at once the most tired of genres and also one that still occasionally manages to come up with new and interesting tales to tell. Speaking as someone who works in a big library system, I get to see a lot vampire-lit detritus. The library's shelves are full of vampire romances, vampire manga, vampire thrillers, and lots and lots of vampire teen fiction. I've even come across a Regency-set vampire romance titled Bitten by the Count. Amidst this sanguine avalanche you can still find gems, and The Radleys is one of them.

The Radleys are a British family living an all too normal life in suburbia. Peter is a GP, his wife Helen works for the local government, and their teenage children, son Rowan and daughter Clara, struggle with the social side of school life. And, of course, Helen and Peter are also vampires, albeit abstaining vampires. They are the vegans of the vampire world, unlike many of their peers, and especially Peter's brother Will, who continues to lead the vampire version of the rock star lifestyle. Peter and Helen haven't told their children the family secret, and themselves struggle with staying on the straight and narrow. Both the children suffer from weakness and lassitude from not drinking blood, but put it down to other reasons. The entire family is waist-deep in angst when we meet them. Peter and Helen feel bored and constricted by their non-vampire lives, Clara is nauseous all the time because she's become an actual vegan, and Rowan is experiencing the sheer hell of an unrequited first love. Things take a turn for the very much worse at a nighttime field party when one of Clara's classmates tries to rape her. Clara's vampire side comes bursting out (much to her shock and horror) and her attacker ends up dead. Very dead. The Radley family is now in full crisis mode as Clara's crime has to be covered up, the family secret is revealed to the kids, and Will arrives to "help" the family with their troubles.

Every modern vampire story has to build its own unique mythos, and Matt Haig does an excellent job of putting some clever wrinkles on the standard rules and regs that govern bloodsucker behavior. His vampires are long-lived, but not eternal; can tolerate sunlight, but don't like it; only gain supernatural powers with the consumption of blood; are known to the police, but somewhat tolerated; and can only "create" new vampires by sharing their own blood with their victim. Haig's world-building is admirable, but his real focus is on the psychological pressures facing the Radley family. More specifically, the various flavours of depression afflicting their lives. Both Peter and Helen pine for the freedom and wantonness of life as a predatory vampire. Clara and Rowan are dealing with the usual tortures of teen life, but with the added pressure of longings and anxieties they can't understand.

The vampire component gives this novel its narrative backbone, but it's heart is invested in describing how a family copes with heartbreak, buried secrets, resentment, and fear. The Radleys go through the emotional wringer, and the plot, which is built like a thriller, doesn't give them time to catch their breath. This effectively doubles the story's tension, because it's a race to see what will happen first: will the family be "outed" or will it be destroyed by its own inner tensions. The novel is, by necessity, very dark, but there are moments of humour, and Will is the sort of character who's hugely entertaining as only a truly wicked vampire can be. If The Radleys is ever filmed, the casting call for Will will describe him as a "younger Bill Nighy-type." The only fault with the novel (a very minor one) is that the tone lurches back and forth from YA to adult and back again several times. But I'd still recommend it to both audiences.
Posted by Cary Watson at 3:48 PM