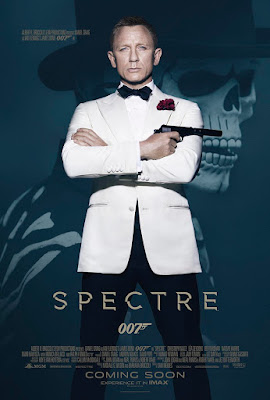 Oh, James, how could you do this to me? I forgave Roger Moore's safari suits and Inspector Gadget gadgets. I overlooked Timothy Dalton's incongruous Royal Shakespeare Company gravitas. And I even tried to pretend that On Her Majesty's Secret Service never happened. But I draw the line at being bored senseless for over two hours.

For this entry in the Bond franchise, 007 is up against Ernst Stavro Blofeld, played by Chrisoph Walz. Blofeld's madcap scheme this time out is to tap into the databases of all the world's leading intelligence agencies, which will enable him to...I'm not actually sure what will happen, but it's probably quite naughty. To combat this dastardly plot Bond has only one option: he must travel from London to Rome to Austria to Morocco in a series of increasingly stylish and acutely-tailored outfits. Once Bond turns up in a white dinner jacket on the dining car of a Moroccan train, we, and SPECTRE, know the game is up. Blofeld has nothing to match Bond's sartorial supremacy, and he even makes the ghastly faux pas of wearing loafers without socks. Seriously, how can a man who's still using Miami Vice's Sonny Crockett as his menswear muse hope to defeat Bond?

Things get off to a reasonably good start with a fight aboard a helicopter above a packed square in Mexico City, but after that it's all downhill. A car chase in Rome is the definition of perfunctory. Any old episode of Top Gear does something more exciting with cars than this sequence does. Next up is a car/plane chase in the Austrian alps that has some of the ridiculousness of the Roger Moore films, but none of the raised-eyebrow humor. The humor is crucial because without it sequences like this just feel silly. A well-placed gag lets us in on the joke. Bond then proceeds to Blofeld's base inside a huge meteorite crater in the Moroccan desert. This looks promising, I thought, preparing myself for an all-out battle akin to the climax of You Only Live Twice. No such luck. Bond basically walks out of the base whilst shooting some obligingly stationary henchmen ("Shoot me, Mr Bond, shoot me! I'm standing over here! Oof! Gosh, I've been deaded by James Bond 007. My mum will be proud...urghh."). The actual finale happens in London, and it's an unimaginative piece of business that I thought had died out with silent films: Bond's love interest has been tied up in a building that Blofeld has wired to explode, and James must race through the place to find her before time runs out. The only thing missing is a loyal canine to lead James to his girlfriend.

This also has to be the worst Bond film for overall sexiness. Lea Seydoux as Dr Madeleine Swann is, alas, far too young for middle-aged Daniel Craig and they have zero chemistry together. Roger Moore also had problems with the age gap, but his awful puns seemed to take the sting out his love scenes with women half his age. Monica Bellucci makes a brief appearance in the film in what must be the most awkward and creepy sexual episode in any of the Bond films. James backs a seemingly reluctant Bellucci against a wall and disrobes her as though he was unwrapping a Ferrero Rocher chocolate he'd been saving for a special occasion.

I enjoyed Daniel Craig's Casino Royale, but it marked the beginning of an attempt to make Bond more nuanced, human, and believable. It's as though the producers and directors felt slightly ashamed to be associated with a film franchise that had such a sexist and puerile history. But who the hell wants a real world James Bond? If I want that I'll rewatch any of the Jason Bourne films. And as each of Craig's Bond films has come along, his performance have become stiffer, more laconic, and increasingly humorless. Sam Mendes, the director, seems happiest when he's filming lush interiors and Bond's wardrobe. Now, I expect James Bond to dress well, but this film takes it to the next level; so much so that at times he seems to be wearing body art rather than anything made of wool or cotton. The surest sign that the people at the top end of the production team feel that they're too good to be making a Bond film is the name given to Lea Seydoux's character. Madeleine Swann? Really? Is a laboured and witless A la recherche du temps perdu reference supposed to convince us that some very tall foreheads were involved in the making of the film? Sorry, but dragging Marcel Proust into a Bond film is something I can never forgive.