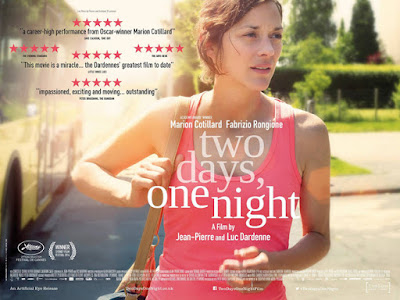 In addition to run-of-the-mill critical commentary, films these days are often judged on their attitude towards visible minorities, gender roles, ageism, ethnic or religious stereotyping, and the LGBT community. The sequel to Zoolander, which has yet to be released, has gained the ire of the transgender community, Adam Sandler's western series for Netflix has been attacked by native American groups, and Get Hard with Will Ferrell was criticized for its racial politics. It's no surprise that modern films are under this kind of scrutiny given that until fairly recently filmmakers had no qualms about mocking, vilifying, disparaging or ignoring a wide variety of minority groups. There is, however, still one group that lacks adequate or sensitive representation on screen: the working class.

Working class characters are common enough in films as victims or perpetrators of crime, as comic cutups, sidekicks, army grunts, slackers, or as individuals pole vaulting into a higher tax bracket thanks to pluck and luck and pulling themselves up by their bootstraps. What we almost never see are stories about working class people where the focus, the heart of the drama, is on their actual working lives and their relationship to capitalism. Losing a job is one of the most dramatic and painful things that can happen to a person, but it's rarely presented on film. We sometimes see middle- and upper-middle-class people lose their jobs, but that's usually just the jumping-off point for a feelgood story about "self-discovery" and learning about what "really matters." For people who are paid by the hour, having a permanent job is what really matters.

Two Days, One Night is about a French woman, Sandra, played by Marion Cotillard, who loses her job and then fights to get it back. She works for a small firm that assembles solar panels in the north of France. The job is blue collar, there's no union, and the pay is just adequate to sustain a decent lifestyle for her husband (who also works) and two kids. If she doesn't get her job back the family will probably have to move back into social housing. Sandra lost her job because her co-workers were given a choice: get a 1,000 euro bonus and see Sandra let go or keep Sandra and not get a bonus. A clear majority of the 16 workers voted to take the bonus and say goodbye to Sandra, who had the least seniority. At the urging of her husband and her friend, Sandra goes to the company's owner and asks for another vote. She points out that the vote wasn't fair because the foreman who initiated it led the workers to believe that if Sandra wasn't let go then it would mean someone else going out the door, which wasn't the case at all. Also, the ballot wasn't secret. The owner agrees to another vote, and Sandra has the weekend to try and change the minds of the people who voted against her.

It would have been so easy to make this film overly sentimental, preachy or polemical. What we get is a subtle, nuanced portrayal of working-class life under pressure. Each visit Sandra makes to one of her co-workers is a glimpse into the ambitions and struggles of the average worker. In terms of film dramas, one thousand euros (equal to about $1,500) is a paltry sum. In the real world, and in this film, that money represents school tuition, essential car repairs, debts repaid, a family vacation, home improvements, and so on. These aren't world-shaking issues, except to the people who have to deal with them. What's also shown in these meetings is the empathy some workers have for their fellows. They all acknowledge that Sandra got a raw deal and isn't just a victim of bad luck. They also feel terrible that they've  been put in the position of deciding the fate of a co-worker. Without saying so explicitly, all of the workers are disturbed or even horrified that they've been put in the position of deciding the fate of Sandra and her family.

The characters are superbly and efficiently drawn. Sandra is no model worker. She suffers from depression, and it's hinted that this affected her work in the past, which may have made it easier for people to vote her out. And by pleading her case with her co-workers Sandra causes some mini-crises in other households as people argue over whether they're justified, morally and otherwise, in sending her packing. One couple breaks up over the issue, and in the film's most powerful scene, a young worker breaks down in tears of shame and relief when he finds out he'll get a chance to change his vote and keep Sandra at the company. Sandra also suffers during this weekend because she's forced to beg people for her job, knowing full well that she's causing them hardship if she convinces them to change their vote.

The end of the film (SPOILER ALERT!) is a mix of pain and hope. The second vote ends in a draw and so Sandra does lose her job. She isn't, however, crushed by this decision. Her experiences over the weekend have revealed her own strength, and, more importantly, the empathy and solidarity of many of her co-workers. The film ends with Sandra going off to begin the search for a new job, buoyed in spirits (slightly) by what she's learned about herself and her co-workers. It's a bitterly realistic ending, but one that points that fighting for justice in the workplace is both difficult and rewarding and makes for fantastic, if rarely seen, drama.
Posted by Cary Watson at 5:07 PM