Book Review: The Winshaw Legacy, or What a Carve Up! (1994) by Jonathan Coe 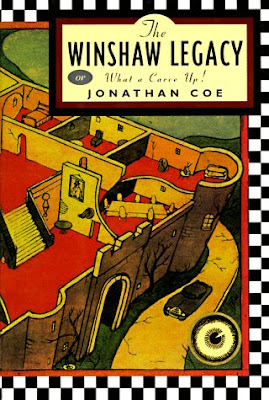 I'm not even going to try and fully outline the plot of this novel except to say that it's a wonderment of deviousness, coincidence, and mystery--Dickens on steroids. In a nutshell, the eponymous Winshaws are the Borgias of post-war Britain. From a family fortune founded on the slave trade, the Winshaws now have their bespoke talons securely fastened in banking, politics, the arms trade, media, and agribusiness. The central character is not a Winshaw, but one Michael Owen, a novelist with emotional baggage to spare. Owen takes a commission to write a history of the Winshaw family. The person underwriting the commission is Tabitha Winshaw, who has been confined in a mental asylum for the past twenty or so years by the other Winshaws. Tabitha is convinced that her brother Lawrence caused the death of her other brother Godfrey during World War Two. And it's Godfrey's death in the war that forms the coiled spring at the centre of a plot that encompasses tragedy, farce, acidic social and political commentary, mass murder, and some of the most polished comic writing this side of P.G. Wodehouse.

The dexterity of the plotting is breathtaking. The story has multiple narrative layers and voices, bags of characters, and sudden tonal shifts that sometimes put the story up on two wheels. It's understating matters to say that Coe is successfully juggling a lot of balls here; he's also keeping a flaming torch, a roaring chainsaw and an angry cat aloft. This is one of those rare novels that's thrilling because we're witnessing a writer making all kinds of high-risk maneuvers that could end very badly. Let me put it this way: how many writers would dare to incorporate both Sid James (star of the Carry On films) and Saddam Hussein (star of various crimes against humanity) as characters in the same novel?

The Winshaws, all nine of them, are mad or bad, and sometimes both. Some reviews that I came across have complained that the presentation of the family lacks subtlety; that the Winshaws are too starkly villainous. Some of the same reviews have also complained that Coe's depiction of political and social issues in Thatcher's Britain is similarly stark and simplistic. These reviewers are missing the point. What Thatcher unleashed in the UK was nothing less than a conservative counter-revolution against a generation of public policies aimed at creating and improving the social welfare state. Thatcher's "reforms" were as brutal and unsubtle as it's possible to be. To talk about those changes in a subtle manner would be to diminish their intent and dumb savagery. If the Winshaws are presented as posh, greedy brutes, it's because those were the foot soldiers in the war to turn back Britain's social and economic clock to somewhere in the Victorian age. And, of course, there are villains, and then there are exceptionally well-written villains. Coe has created a wonderfully diverse group of monsters in the Winshaws, and while they are all determinedly rotten, they are also very entertaining; although none of them goes so far as too stick their genitals in a pig's mouth. No one could possibly believe that...

If I've made The Winshaw Legacy sound like a polemic, believe me, it isn't. Coe is too smart a writer for that. This is first and foremost a novel filled with keenly observed characters, and some powerful episodes describing human suffering of both the physical and psychological variety. Rather amazingly, these tough elements don't jar at all with comic characters and moments that are often wildly funny. So if your taste runs to state-of-the-nation novels (UK division), make this one your choice rather than Martin Amis' Lionel Asbo, which is essentially written from the POV of a Winshaw. And remember that this novel was written in the early 1990s, long before Winshawism, to coin a term, came to fruition under David Cameron, with hearty endorsement by Britain's financial and media elites.