Book Review: The Girl Who Wasn't There (2013) by Ferdinand von Schirach 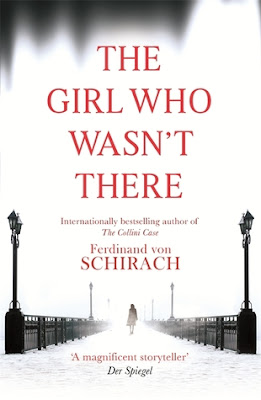 Crime fiction is often divided into two opposing camps: the noir and the cosy. The noir world is filled with vicious criminals, unspeakable crimes, gritty environments, forensic horrors, and detectives who are often only slightly less unpleasant than the criminals they're pursuing. The cosy universe has bloodless murders, charming and/or amusingly eccentric sleuths, leafy and pleasant locales, and killers who are often almost as nice as their pursuers. I'm coming to believe, however, that noir crime fiction is, in fact, as cosy as the crime novels featuring cats and spinsters and dead vicars. The dictionary defines "cosy" as something that provides a feeling of comfort, and comfort can be used to describe a pleasant routine.

A lot of noir fiction provides a comfortable routine for the reader. The crimes and criminals and settings of these novels may be harrowing, raw, and described in the most explicit terms, but there's a reliable routine to them: the detectives (private or official) will have their usual vices to contend with (booze, pills), they'll still be brooding over that great tragedy in their life (death of spouse/child), they'll have a brief affair with one or two attractive members of the opposite sex, and they'll spend some time name-checking their favourite musicians/books/films/single malt whiskies. And of course there will always be a sense of closure to each novel. The bad guy will be caught or killed, although the cost may be high and there'll probably be a sense that justice hasn't been completely served. Really, any crime fiction series with a recurring central character ends up becoming a "cosy."

There are, however, a few authors I'd describe as truly noir, and to separate them from the rest of the herd I'll call them writers of Brutalist noir. Like the architectural style I've poached the name from, writers such as Massimo Carlotto, Jean-Patrick Manchette, Dominique Manotti, and Pascal Garnier write novels that make no concessions to comfort. These writers specialize in characters and stories that are raw, blunt, and unsubtle in their purpose. Like your local unloved architectural landmark from the 1970s, the Brutalist noir novel stands out by being the literary equivalent of an eyesore. These writers get in your face, step on your toes, knee you in the groin, and they absolutely love to kick cats.

Ferdinand von Schirach has joined the Brutalist club. The Girl Who Wasn't There has some of the flavour of an Italian giallo film thanks to its main character, Sebastian, the slightly odd son of an upper class German family who becomes a famous photographer/installation artist and the only suspect in the apparent murder of a young woman. The heart of the novel is its depiction of Sebastian's upbringing by an unloving mother and a father obsessed with hunting. Schirach is ruthless in showing the flaws and peculiarities of this trio. It's typical of Brutalist writers that their attention to detail in characterization makes their characters almost wholly unlikable. Schirach & Co. seem to have discovered a truth, or at least believe, that all people, no matter how innocuous or benign on the surface, are in essence an aggregation of prejudices, fears, petty hatreds, and unsavoury habits.

Most of this short novel (slimness being another feature of Brutalist noir) is a character study of Sebastian and his parents. Once the focus shifts to the mystery element of the story, the novel suffers a bit from the introduction of Konrad Biegler, a defence lawyr who's brought in to represent Sebastian at his murder trial. Biegler is a rather conventional character (grumpy but brilliant lawyer) and his presence combined with a story resolution that's flat and confusing, left me a bit disappointed. The ending wasn't a deal breaker for me, but it keeps Schirach out of the top echelon of Brutalist noir writers.