Book Review: On the Laps of Gods (2008) by Robert Whitaker 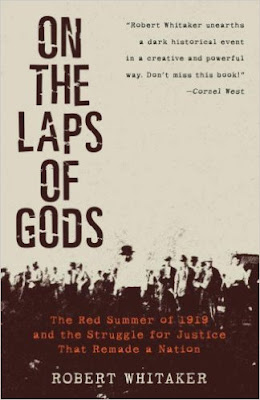 On the evening of September 30, 1919, a group of black sharecroppers gathered in a church in southeastern Arkansas. They were there to join a union that would represent them in a legal tussle with local plantation owners, who had been shamelessly defrauding them for years. The sharecroppers had been warned by both the police and plantation owners that any kind of union activity would not be received well, which in the context of the times meant violent suppression. For this reason some of the sharecroppers were armed, and, sure enough, after darkness fell a car stopped near the church and a group of white men got out. They opened fire on the church and some of the sharecroppers returned fire, killing one of the attackers. So began one of the worst, and most unknown, atrocities in U.S. history. Over the next three days white posses, policemen, and local army units combed through the woods and fields near Elaine, Arkansas, seeking to put down what they called an "uprising." At least 170 blacks were shot and killed, including women and children, and it's very possible that the total death toll was higher by several hundreds. Five whites were killed, at least one thanks to "friendly" fire.

No nation likes to acknowledge its dirty little secrets, especially when those secrets involve mass murder. Japan is largely silent on its crimes in China during WWII; Britain glosses over famines it did nothing about in India; Turkey ignores its genocide of Armenians; and Italy doesn't talk about its use of poison gas in Ethiopia in the 1930s. It's a rare nation that doesn't have a blood-soaked skeleton in its closet. Popular history and culture in the U.S. has done a poor job chronicling the atrocities committed against black Americans in the Jim Crow era, which lasted nearly a century after the end of the Civil War. What On the Laps of Gods does is give us a sharp picture of the all-encompassing repression experienced by blacks in the Jim Crow period.

The massacre in and around Elaine, Arkansas, was horrific, but as Robert Whitaker makes crystal clear, it was simply an extra-large example of what was happening to blacks throughout the South. Lynchings in the early decades of the 20th century had become a spectator sport, extensively publicized in advance and attended by thousands. The word "lynching" doesn't begin to describe the horrors that went on at these events. To put it mildly, condemned witches in the middle ages received better treatment than blacks did at the hands of Southern mobs. And for every lynching or pogrom that's made it into the historical record, hundreds, if not thousands, of others have been almost forgotten. Buried in the Bitter Waters: The Hidden History of Racial Cleansing in America by Elliot Jaspin, a book that should be read in tandem with this one, describes how dozens and dozens of black communities were erased from history by white mob violence in this era.

The killings at Elaine weren't just about racism. Blacks were cheap, almost free, labour in the South. Decades of Jim Crow legislation had created a situation where blacks could be held in debt servitude, and any attempt by blacks to redress their situation through the courts were ignored, tossed out, or met with violence. The Elaine massacre was as much about capitalism vs. labour as it was racism. And this bloody battle against organized labour wasn't confined to black sharecroppers. In 1921 in Logan County, Kentucky, 80-100 white coal miners were murdered by police and mine guards when they tried to organize a union (read The Company Town by Hardy Green for more info on this episode. My review).

The second half of Whitaker's book covers the legal battle to free the 12 black men sentenced to death for their role in the "uprising." The lawyer in charge of the case was Scipio Africanus Jones. Jones was born into slavery, and in true American fashion he pulled himself up by his bootstraps to become a respected lawyer in Little Rock, Arkansas. He faced a forest of legal and social hurdles in defending his clients, but he eventually got his case argued in front of the Supreme Court of the United States...and won. It was a precedent-setting case, and Whitaker does a masterful job of making the legal intricacies comprehensible for those of us who got our training in law from watching Rumpole of the Bailey.

One reason the history of white on black violence has largely been swept under the rug is that it interferes with the narrative being offered by rightist politicians. In the Fox News/Tea Party scheme of things, the black economic underclass finds itself in that position due to its own fecklessness, choice of poor role models, a lack of initiative, and reliance on government "handouts". Racism has no place in this narrative because it undermines the philosophy of social Darwinism that acts as a screen for contemporary racism. The issues raised in this book still resonate today. The Black Lives Matter movement, which is nothing more than some peaceful protests and a hashtag, has been greeted with cries of horror by the right and characterized as a "hate group." This is remarkably similar to what happened to Elaine's sharecroppers when they began organizing. Plantation owners greeted the idea of a sharecroppers union with accusations of bolshevism and feverish fantasies about blacks plotting to exterminate all the whites in the area. The sharecroppers' fight against economic exploitation by plantation owners is mirrored in what the residents of Ferguson, Mo., experienced at the hands of the civic authorities. Ferguson is where the Black Lives Matter movement came to national attention after the police shooting of Michael Brown, and the county in which it sits has for years been using the criminal justice system and its fines as a kind of taxation by incarceration. It's debt servitude under a new name.

On the Laps of Gods is a superb work of historical research that weaves together multiple issues and characters without getting bogged down in the details. But what might be most remarkable about Whitaker's book is the deafening silence that greeted it upon publication. A Google search shows that it got a review in the New York Times, which is all well and good, but beyond that, nothing. It's a testament to how sensitive the issue of white on black violence is that except for the NY Times, no other major publication reviewed it. It's that silence that truly shows the need for Black Lives Matter.
Posted by Cary Watson at 1:35 AM