Book Review: The Mysteries of Paris (1842) by Eugene Sue 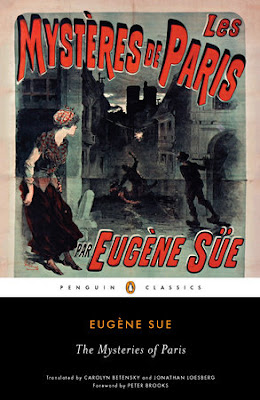 There should be a literary dating site to match up readers seeking a long-term reading commitment with novels that suit their preferences. A website like eHarmony or Lavalife that lets you know if your tastes and interests are suitable for a serious relationship with door stoppers such as War and Peace, Remembrance of Things Past, or the collected works of James Patterson. The Mysteries of Paris is over 1,300 pages of melodrama, sentimentality, granite-jawed heroism, pathos, unrepentant villainy, and strident social commentary. Like many 19th century novels it began life as a newspaper serial, running in 150 installments in a Paris newspaper. According to the novel's introduction, Mysteries was probably the biggest bestseller of all time, and it inspired a score of copycat versions set in other cities and countries, and also influenced the writing of Les Miserables and The Count of Monte Cristo. This is what made me read it. I'm a sucker for a novel with a dating profile that reveals it's influenced a host of other writers.

There are a battalion of characters in the novel, but the two that count are Rodolphe and Songbird. The former is a wealthy German count who likes to skulk around Paris posing as a labourer in order to right wrongs and punish evildoers, while the latter is a teenage prostitute with the soul of saint. The story begins with Rodolphe rescuing Songbird (also called Fleur de Mairie) from her life on the streets. It turns out that the two have a connection both are unaware of, but before that is revealed, Rodolphe and Songbird have to battle against the plots and schemes of characters with names such as the Owl, Red-Arm, She-Wolf, the Schoolmaster, and the Gimp. If this sounds like a cabal of Batman villains, the comparison is a valid one. Rodolphe may be the first superhero. He's wealthy, he's unbeatable in a fight, he goes about in disguise, and he fights bad guys just for the hell of it. Now who does that sound like? And there's no denying that the writing and characterization isn't much more sophisticated than what's found in most comic books.

I probably shouldn't have invested the time required to read all 1,300+ pages of The Mysteries of Paris, but the plotting was hard to resist. Eugene Sue wasn't a master of prose, but he did an amazing job of weaving multiple plots and sub-plots together without losing the thread. And he can't be faulted on the bad guy front. Nineteenth century literature's villains are usually far more memorable than the heroes and heroines, and this novel is no exception. The novel's most powerful scene is actually shared by three of its villains, the Owl, the Schoolmaster, and the Gimp, as one of the three is slowly murdered in a pitch black cellar. Sue also creates a couple of comic relief characters that Charles Dickens would have approved of. Of course the downside to many novels of this era is that the heroes and heroines are, well, so noble and pure and sweet (with extra whipped cream on top), that they fully engage the reader's gag reflex every time they step on the scene. All is not lost, however; Sue brings to his novel a fiery anger at the way the poor are treated by the state and capitalism, although he doesn't use words like "state" or "capitalism." Where Dickens often merely pitied the poor in his novels and begged for more charity for them, Sue turns parts of his novel into agitprop for structural changes in society to benefit the working classes. It's not a call to arms or The Communist Manifesto, but it's a bracing change from Sue's contemporaries. Also, it's a damn sight better than Les Miserables, which now seems like the work of a plagiarist.
Posted by Cary Watson at 1:35 AM