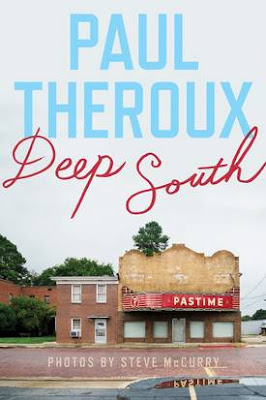 A new Paul Theroux travel book is always a cause for celebration, and while I certainly enjoyed a lot of Deep South, other portions left a bad taste in my mouth. Theroux's odyssey through America's Deep South is illuminating, thorough, and heartfelt, but also wrong-headed and occasionally condescending.

I knew there was trouble ahead when Theroux began the book with a diatribe about the indignities of air travel: the delays, the security, the searches, and so on and so on. This specific kind of whining is the special province of older, white, affluent writers, and I expected Theroux to be better than this. No one likes airport security, but the alternative is too grisly to contemplate. Unfortunately, Theroux then goes the extra mile from whingeing all the way to pure snobbery when he says, "All air travel today involves interrogation, often by someone in a uniform who is your inferior." Ouch. Paul doesn't define what makes someone inferior to him, but I'm guessing it's because they wear an ill-fitting uniform and are paid by the hour. Of such comments revolutions are born. But on with the trip...

Theroux has always excelled at getting under the surface of the lands he's journeyed through, and this outing is no exception. He has a novelist's eye for character and landscape, and, even more importantly for the purposes of a travel writer, an unquenchable curiosity about people and local history. Theroux drills down deep into the South's history and culture, showing how the Civil War and the Jim Crow-era have never truly ended; in fact, if the book has a theme it's that racism is alive and well throughout the South. I shouldn't have been surprised, I suppose, but the extent of the divide between blacks and whites in the South is still somewhat shocking. Theroux's tour of the South takes in many locations that were the scene of infamous examples of white on black violence, and he does an admirable job of bringing these episodes to life. But then he puts his foot in his mouth when he describes being harangued by a black woman for arriving late for an interview. He casts her in the role of professional white-hater, and, what's worse, surmises from her looks that she might not be black at all. What makes this so offensive and dumb is that later in the book Theroux shows that he's aware of the fact that white Southerners regard even a trace of black "blood" as enough to count someone as black. This is, in fact, the theme of Light in August by William Faulkner, an author who Theroux discusses at length in the book. Theroux might not have seen his antagonist as black, but it's almost certain that Southern society does.

Most travel writers who take a spin through Dixie invariably knock off a few thousand words about antebellum mansions, mint juleps, oak tress dripping with Spanish moss, Southern hospitality--all the boilerplate of Southern travel writing. Theroux doesn't have time for that kind of tripe. He shows that the South is primarily a land of grinding poverty, fear of the outside world, and apocalyptic fatalism (and a hell of a lot of fried food). Theroux has great sympathy for the South's poor, but a shaky understanding of the politics and economics behind this poverty. At times he seems to take a the-poor-are-always-with-us tone, as when meets one particularly indigent family and offers a quote from a Chekhov short story called Peasants. The quote describes a woman's sense of realization that peasants are human and can be pitied for their suffering. It's a tone deaf piece of writing by Theroux since it casts him in the role of a patronizing snob--look at me, I feel sorry or these people and here's an example of my erudition to prove it. He correctly points to free trade deals that having hollowed out the South's manufacturing base, as have cheap imports, but he doesn't take the next step and point out that in this regard the South is no different than, well, most every other part of the U.S.

Since 1980 and the election of Ronald Reagan, the corporate and political elite of America have been engaged in an overt and relentless campaign to rollback the relationship between capital and labour to something approximating the period before 1900. In short, business wants workers underpaid and unrepresented by unions, and their political allies want to distract or disenfranchise voters who might want to reverse this process. There's nothing secret about this and dozens of writers have described it at length. The South has more than its fair share of poverty, but that's largely because the region was always well ahead of the rest of the country in the twin sciences of disenfranchisement and union busting.

Theroux is good at micro views of poverty, but the macro escapes him. He fails to see that he's living in a country which is now almost existentially committed to creating wealth at any expense. The fact that he himself has homes in Hawaii and Cape Cod (I'm guessing they're not shotgun shacks) is a testament to the wealth-centric economic policies that create poverty. Theroux bemoans the lack of government assistance for the poor, but doesn't make the link to the low taxation he enjoys which pays for luxury homes. It's a simple equation: less social welfare spending so the upper-middle-classes and above can grow richer thanks to lower taxes. Theroux applauds various non-profit groups and NGOs that try to ameliorate life for the Southern poor, but he fails to see that these are simply band-aids. Without profound changes at the political level these efforts are largely futile.

Theroux takes the Bill Clinton Foundation, the Bill & Melinda Gates Foundation, and the federal government to task for funding anti-poverty projects in Africa and elsewhere when many parts of the South are in just as bad a shape. It's a fair point, but it overlooks two factors. First, to acknowledge that kind of poverty exists in the U.S. is a tacit admission that there is a systemic problem in the way wealth is distributed in America, and no one in the upper levels of American society is willing to cop to that. Second, Theroux's complaint overlooks the fact that racism plays a huge part in the debate around social welfare in the U.S. American culture has always seen poverty as a self-inflicted wound caused by laziness and ignorance, and those are the same qualities ascribed by racists to blacks. In short, a significant number of white Americans have traditionally seen poverty as a black problem caused by the innate moral and intellectual shortcomings of African Americans. Instead of seeing blacks as simply the economic underclass, no different than economic underclasses in other countries, whites have seen a "black problem" rather an economic problem.

The doggedness and sense of empathy Theroux shows in his trip down south is admirable, as is his prose, but his inability to explicate the political and economic causes underlying the South's near-Third World status can be very frustrating. He does, however, get bonus marks from me for rightly praising the works of Charles Portis, a writer who should be famous for more than just True Grit.
Posted by Cary Watson at 2:48 PM

"Of such comments revolutions are born."
... if only!

Yes, I may have been a bit too optimistic.