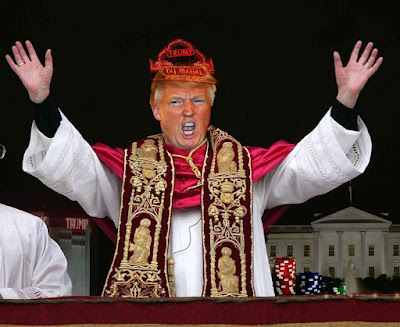 No one's been saying much about Donald Trump lately so I thought I'd try and get a conversation going.

The business of political punditry has never been better or busier thanks to Trump and the drunken clown fight that is the GOP nomination process. One aspect of Trump's rise that's produced mass head scratching has been his success with evangelical Republicans. Ted Cruz, the most bothersome of the GOP's divine host of God-botherers, was supposed to be the darling of those who think Jesus came over on the Mayflower, drove the dinosaurs out of America, and then invented baseball. Evangelicals, so the theory goes, should be shocked and dismayed by Trump's worldliness, his vulgar displays of wealth, his sexual boasting, his multiple marriages and infidelities, and his unrepentant New York, N.Y.-ness.

What people don't appreciate is that this makes Trump the pope of the Church of America. You see, evangelicals aren't really Christians. Yes, they assemble in churches, say prayers, quote bits and pieces from the Bible, but it's more correct to call them members of the Church of America. I'd argue that what's known as the religious right is actually a new, hybrid religion that's composed of equal parts capitalist boosterism, white ancestor worship, rabid nationalism, militarism, with just a patina of Christianity. Followers of the Church of America, unlike Christ, have an active dislike for the weak, the meek and the poor, and they're definitely not peacemakers. The religious right has taken bits and pieces from the Old and New Testament to craft a religious outlook that ennobles capitalism, praises warriors, exalts masculinity, and denigrates scientific thought. The best evidence for this hybridization is the so-called "prosperity gospel," which basically turns God into the Uncle Money Bags character from the game of Monopoly. Play the faith game the right way, says the prosperity gospel, and you'll be rewarded with riches.

Trump is the ideal leader of the C of A. His wealth, particularly his flaunting of it, is a siren call to those who believe that wads of money are proof of God's favour. This in turn ties in with the widespread belief on the religious right that American was specifically and particularly blessed with natural riches by the Almighty. To this way of thinking, Trump is surely one of God's chosen ones since he's been blessed more than most. The other factor that Trump relies on to attract evangelicals (probably without his realizing it) is his history as a horndog. This would seem to be illogical given the religious right's habit of getting its plain white J.C. Penny knickers in a twist whenever sex becomes an issue. Trump's sexual history is a declaration of male privilege, appetites, and vanity, and as such it dovetails nicely with the evangelical view of the sexes: men are providers and defenders of the family, bold and brave in their dealings with the world outside the family, and if they cross a line or two, or stray, they must be forgiven by their womenfolk because the challenges they face are so taxing. Women, on the other hand, should concentrate solely, as the German saying goes, on kinder, kuche, kirche. Trump is vividly and ostentatiously masculine, and that goes down a treat with those evangelicals who believe that men should be at the centre of the family and the nation. And Trump is certainly far more butch than the rest of the GOP field, all of whom come across as various flavours of nerd.

I can't say I'm surprised at Trump's success; I actually kind of predicted (*pats self on back*) that someone like him would come along in this piece I wrote four years ago on the Republican primaries. Until the GOP finally splinters into two new parties, the Delusional Republicans and the Deranged Republicans, we'll be seeing more of the same madness from the GOP every four years. It's a sickening thought, but at least it'll probably keep Twitter from going bankrupt.

Thanks JC. Also check out Taibbi's comments from a couple of weeks ago, if you haven't already.