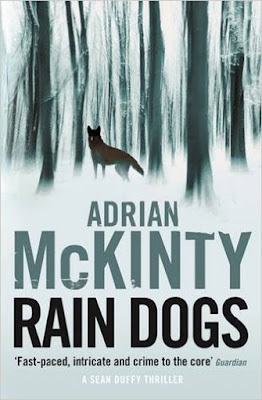 This is the fifth in Adrian McKinty's series of mysteries featuring DI Sean Duffy of Northern Ireland's Royal Ulster Constabulary, and it's time to start thinking of them as historical fiction (they're set in the 1980s) and not just mysteries. I say this because one of the purposes of historical fiction is to reveal the past in ways more subtle and nuanced than can be found in history books. The bare bones history of Northern Ireland's Troubles is well known, but a writer like McKinty teases out the quotidian life of people living at the leading edge of the conflict. What makes this series have a foot in both literary genres is that in each book McKinty incorporates one or more historical figures (Gerry Adams, Margaret Thatcher, John DeLorean, etc.) who had a role, big or small, in NI's conflict. The intersection of real characters and events with the fictional Duffy has a twofold purpose: it marks the series out as an attempt to add shading, colour, and perspective to the historical record, and it's also a way of keeping the memory and significance of the Troubles alive.

There are plenty of mystery series set in the past featuring sleuthing Victorians, medieval monks, and Regency aristos, but in almost all these examples the historical setting is just dusty window dressing. McKinty is trying to draw attention to some fairly recent history that's beginning to slip from what could be called the popular historical record. The Irish (I'm including NI and Ireland in this) are in a peculiar situation where their image abroad, the myth of Irishness, is a twee amalgam of peat smoke, mad poets, green fields, gurning peasants, and well-lubricated wit. It's an image that keeps the tourist dollars flowing and warms the hearts of descendants of the great Irish diaspora. The Troubles interfered with this travel poster narrative in a big way. How could all those twinkly "Oirish" people throw bombs into crowded pubs or kneecap women? It was like finding out your favourite uncle had a stash of kiddie porn. As the Troubles have wound down to a dull murmur, the shamrock-encrusted image of the Irish has filtered back, and populist fare like Patrick Taylor's Irish Country Doctor book series and TV's Ballykissangel have brought the Irish compass needle pointing back to due leprechaun. The Duffy books are, perhaps, unique in reminding the literary public that until fairly recently a small population of white, English-speaking Christians were going at each other with the kind of ferocity we now associate with the Middle East.

This Duffy mystery may be the most polished of the bunch. It has a variation on the locked room puzzle (a locked castle!), and the set-up for it is splendidly handled. Chapters four and five should be read by any aspiring mystery writer as an example of how to establish a crime scene and lay out all the relevant clues. The death being investigated is that of Lily Bigelow, a writer for the Financial Times who seems to have killed herself  by jumping from the top of Carrick Castle. Bigelow was covering a trip to NI by a group of Finnish businessmen but as Duffy digs deeper it turns out that Bigelow was interested in uncovering something very nasty. The novel is filled with McKinty's usual wit and sharp descriptions of life in NI, and there's a bonus side trip to Finland that, visually speaking, seems to have been inspired by Billion Dollar Brain, a brilliant and unappreciated film by Ken Russell (my review). And the finale suggests that if there any more Duffy novels, his life might be headed in an interesting new direction.
Posted by Cary Watson at 6:22 PM