The Good, the Bad and the Glenn Healy 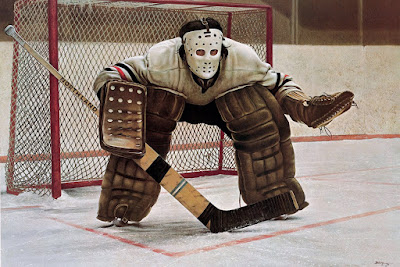 As a degenerate hockey fan (go Leafs!) I watch a lot of games and listen to way too much sports talk radio. The big story of the 2014-15 season was Rogers TV/Sportsnet taking control of almost all hockey broadcasts in Canada in the first year of their multi-billion dollar agreement with the NHL. Rogers splashed out on glitzy new sets and poached talent from rival TSN and the CBC. The result was a decline in ratings in both the regular season and the playoffs. It wasn't supposed to go this way. Rogers bet big money on hockey, and figured a fresh approach, or at least a serious cosmetic makeover, would harvest more viewers. We're now almost two full seasons into the Rogers era of hockey broadcasting, and here's my take on what's right and wrong with it.


Less Ron MacLean. He's not completely off the airwaves yet, but, fingers crossed, his banishment to the Siberia of Hometown Hockey and his limited exposure on his Punch and Judy show with Don Cherry will, I hope, lead to permanent retirement. As host of Hockey Night in Canada, MacLean came across as a spoiled, narcissistic, smirking adolescent. He treated his own opinions as gospel and became petulant and whiny when faced with even mildly contradictory views. And his self-indulgent interviewing style, loaded with witless puns and opaque references to people and events the average viewer was unaware of, became unbearable to watch. So long, Ron, long may you shiver in minor-league rinks across rural Canada.

George Stroumboulopoulos. George's first season as the main host and face of Hockey Night in Canada was a qualified success. He's a more intuitive and agile interviewer than MacLean, and he does a good job of wrangling all the talking heads Rogers has stuffed into its expensive new set. At 43 years-old he's not the "young blood" Rogers touted him as, but he's a vast improvement over Ron. But someone please tell him that saying "Dude" every 20 seconds just makes real young people think you sound foolish. The only mark against him is that he's a shameless and hysterical promoter of the NHL and Rogers. At least MacLean took the occasional swipe at the league.

Christine Simpson. While CBC controlled HNIC, Christine Simpson was relegated to the role of rinkside reporter. Rogers has given her some feature interviews and she's shown skill and intelligence at this job. So much so that one wonders why they haven't given her a hosting job instead of Darren Millard, but more about him later.

Elliote Friedman. It's nice that Sportsnet brought in Friedman to provide some reasoned analysis as a way of counterbalancing the jokey jockstrappery of the resident ex-NHLers; unfortunately, that's resulted in a tedious game of "Let's Tease Elliote" by the likes of NickKypreos, Glenn Healy and P.J. Stock. The puckheads are uneasy in the presence of a non-rink rat and they react by needling Friedman at every opportunity. It's juvenile beyond belief.

Mike Johnson. Insightful, well-spoken, honest, smart, and always to the point. How in hell did this guy get a job in sports broadcasting?  He's the best colour commentator working in Canada by a country mile, and he'll probably be poached by a US broadcaster one of these days, a move that will undoubtedly be cheered by the his Canadian peers--after all, he makes them look bad.

Don Cherry. I feel faintly traitorous for wanting to see the end of Cherry, but it's time we recognized that all his rants and pronouncements about how hockey should be played amount to an argument for more concussions in the game. He can still be amusing and occasionally insightful, but that's outweighed by his rambling, community bulletin board mentions of hockey people no one's heard of, and his pom-pom waving for the police and the military belongs on a different network--Fox News.

No Girls Allowed. Women's hockey leagues continue to grow. Scan the crowds at NHL games and you'll see lots of female faces. Check out HNIC and the only woman on the main set on a regular basis is Sophia Jurksztowicz, who may be eminently qualified to be part of a hockey broadcast but seems mostly cast in the role of eye candy. Sportsnet is using women more prominently as rinkside reporters, and but why not as analysts? Elliote Friedman has no hockey qualifications on his CV, so why was he allowed to make the leap from rinkside reporter to panelist ahead of women like Christine Simpson or Cassie Campbell-Pascall or a dozen others?

And No Europeans or Visible Minorities. European players have been a key part of the NHL for a very long time, but I don't think there has ever been a Euro ex-NHLer used as a colour commentator or analyst. If you were a smart executive at Sportsnet you might think a European analyst could add something new to the mix. Or you could just wheel out another ex-enforcer from Knuckleburg, Saskatchewan, and let him mumble hockey platitudes. Visible minorities are almost as scarce as Europeans. Kevin Weekes was dropped from HNIC by Sportsnet, and now the only non-white faces are David Amber and Arash Madani, neither of whom are given prominent roles.

"Funny" Hosts. I don't know who the first sportscaster/commentator to bring a humorous touch to sports broadcasting was, but he has a lot to answer for. Every sportscast now seems to come with a side dish of "comedy" served up by people who may amuse their friends and relations, but who have no business trying to be funny in public. I'm talking about you, Darren Millard. Millard looks like a circa 1970s game show host with a sense of humor to match. On radio and TV he fills the air with puerile banter and jokes so labored they come with assembly instructions. But he's far from the only one doing this; in fact, it sometimes seems the majority of people in sports broadcasting in Canada are in it for the "laughs." One of the few sports broadcasters who was genuinely witty was Kathryn Humphreys, late of City TV and now retired. Her reward for actually being funny was to be ignored by all the major sports media outlets. The message was clear: a witty woman is a menace to the self-esteem of sports stars and teams, but fatuous clowns like P.J. Stock (another ex-resident of Knuckleburg, Sask.) of HNIC or Cabbie of TSN can have all the national airtime they want.

Tame Journalists. For quite some sports journalists at the Toronto Star and the Globe and Mail have done double duty as paid co-hosts/regular guests on sports radio networks and on TSN and Sportsnet. Two in particular, Damien Cox and Stephen Brunt, eventually transitioned out of print journalism and become full-time employees at Sportsnet. The optics of this are very bad. Sports journalism may be the "playroom" of the newspaper business, but there's something wrong about journalists being on the payroll of the corporations that own the teams they cover. This conflict was made very apparent when Dirk Hayhurst, an ex-MLB pitcher was working as an analyst on Blue Jays games. Some of his criticisms were not well-received by Jays management and he was dropped by Rogers and scooped up by TSN. Rogers, the sole owner of the Jays, has always been sensitive to critiques of their team, and Sportsnet's coverage reflects that fact. Brunt now does puff pieces for the team on Sportsnet's website. On the hockey side of things, the chill on dissenting opinions is less obvious, but it's still there. The talking heads on TV and radio often complain (delicately) about the lack of scoring in the NHL, but no one has noted the precipitous decline in the entertainment value of NHL games. The NHL brand of hockey is frequently tedious to watch (the TV  ratings bear me out), but that ugly truth goes unmentioned by many sports journalists, largely, I suspect, because they worry it would mean the end of their profitable moonlighting gigs on TV and radio. Sportsnet and TSN don't want the public told that hockey is often less exciting than reruns of  Meet the Press, and so far, it seems, few journalists are willing to raise this issue.

Hockey Insiders. This is the job title given people such as Darren Dreger, Bob Mackenzie, Scotty Morrison and Pierre LeBrun, but I can't figure out why their respective employers waste money and airtime on them. So-called insiders boast about breaking stories on trades and the like, but in practice what that invariably means is that they "break" the news a scant few minutes before the team in question posts the news on Twitter. The "insiders" get their scoops by being chummy with GMs and player agents, and this creates a damaging side effect: any time this group is asked to comment on players or teams, their anodyne answers are painful to listen to. They're so desperate to avoid offending or alienating their sources they end up saying nothing of value.

Glenn Healy. He looks like an enraged hedgehog and that's the nicest thing I can think to say about him. Healy's analysis of games revolves around reminding viewers that he once rode the bench for a Stanley Cup-winning team; he spits venom at the very concept of hockey analytics; and his sense of humor consists entirely of bitter sarcasm. Despite these defects, he's somehow become HNIC's most high-profile colour commentator.  It's possible he's a lovely man in civilian life, but on-air he's the most toxic personality in Canadian sports broadcasting. Think of him as the anti-Mike Johnson.