Book Review: No Word From Gurb by Eduardo Mendoza 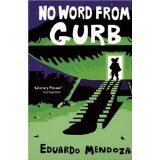 Originally published in serial form in a Spanish newspaper in 1990, No Word From Gurb is the diary of an alien who, along with his co-pilot Gurb, lands in Barcelona for the purposes of research and exploration. The two aliens can adopt any physical form they choose, and Gurb, in order to blend in, chooses to disguise himself as Madonna--the singer, not the virgin. Gurb leaves the spaceship and immediately disappears, leaving his worried and unnamed partner to search for him.

Gurb is not sci-fi, it's just silly, and I mean that as a compliment. Mendoza is an excellent comic writer, able to make his befuddled alien a lovable character, while at the same time delivering industrial quantities of parody and absurdist humour. There are many laugh out loud moments, and probably a lot more if you're familiar with Spanish culture and politics.

One example of sublime absurdity comes when the alien is describing his problems with keeping the different parts of his human body at the right temperature: "The worst is my head, perhaps due to the intense intellectual activity going on there. Its temperature is sometimes in excess of 150C. In order to lessen the effects of this heat, I always wear a top hat, and fill the inside with ice cubes I buy in service stations. Unfortunately, this is only a temporary solution. The ice soon melts, the water boils and the hat is sent up into the air with such force that first ones I had are still somewhere in the air."

There's almost a Lewis Carroll quality to that passage. Mendoza has also written a trilogy of comic detective novels featuring a thief who lives in an insane asylum, but is let out on occasion by the police in order to solve difficult crimes. I've read the first, The Mystery of the Enchanted Crypt, and it's excellent, in a silly sort of way.
Posted by Cary Watson at 11:30 PM

Email ThisBlogThis!Share to TwitterShare to FacebookShare to Pinterest
Labels: Eduardo Mendoza, No Word From Gurb, The Mystery of the Enchanted Crypt