Book Review: The Star of Algiers by Aziz Chouaki 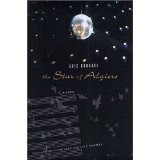 You often see novels promoted as having a rock 'n roll feel or sensibility, but it's not often you read one that has an actual rock 'n roll beat to it. More specifically, a nasty, angry punk rock beat. The Star of Algiers is set in Algeria in 1990-91, just on cusp of the Algerian civil war. The Algiers we see, feel and smell in this novel is, in keeping with the rock 'n roll theme, a mosh pit of a city: dirty, noisy, smelly, overcrowded, and often drunk and/or stoned.

The main character is Moussa, a man in his 30s who shares a three-room apartment with his extended family of fourteen people in a slum district of Algiers. Moussa's ticket out of anonymity and poverty is music; he's a Kabyle singer, which is, it seems, a popular Algerian folk music. But Moussa has aspirations beyond being a successful wedding singer; he constantly reminds himself and others that he's very influenced by Prince and Michael Jackson and wants, in some ill-defined way, to be their Algerian equal.

Moussa's talent is genuine, and he begins to rise in the local music scene against a backdrop of his city and country collapsing into chaos and civil war. Inevitably, as in many rock 'n roll fables,
Moussa descent is fast and furious, and ends with him turning into a militant and bloodthirsty Islamist.

While Moussa is more a symbol than a character, he's an effective guide through the hell of Algiers. On one side is the urban elite: educated, French-speaking, affluent, defining themselves by their Westerness. On the other side are the Islamists, or "beards" as Moussa dismissively calls them. These are men who've embraced religious fanaticism as an unconscious protest against the crushing poverty and corruption of Algeria, and will soon go to war against the one-party government.

What gives this novel is its energy and power, what makes it feel like a throbbing speaker sitting on the side of a stage, is the prose, which is rapid-fire, terse, choppy, acidic. As good as the novel is in depicting a country in free fall, it's even better at showing the wonderful highs and soul-crushing lows of a young man reaching for the stars and falling.
Posted by Cary Watson at 6:09 PM