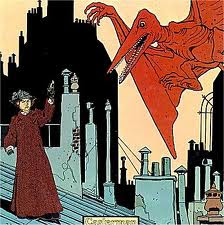 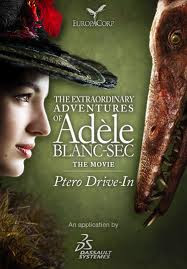 Adele Blanc-Sec is more of the same. Set in 1911, the titular character is a French journalist/female Indiana Jones who we first meet as she's retrieving a mummy's sarcophagus from a burial chamber in Egypt. A mediocre action sequence ensues, and the scene switches to Paris where an aged scientist is, through some unexplained form of mental power, causing a pterodactyl egg to hatch in the Louvre. It turns out that Adele wants to bring the mummy back to Paris so that the scientist can reanimate the mummy, who, it turns out, was an eminent Egyptian doctor circa 3,000 BC. Said doctor will then cure Adele's sister who is in a coma thanks to a...hatpin lodged in her skull.

After the action-y opening the film settles into French silliness, by which I mean a lot high-speed banter, slight visual gags, and way too much comic mugging. None of it is funny enough, and the pterodactyl, who looks good, is not given, as it were, a lot to do. The one interesting thing in the movie is the appearance of some reanimated mummies at the end, who, unlike all previous movie mummies, aren't the least bit threatening, but turn out to be regal and just a bit fey. The film is based on a series of French comic books that appeared in the 1970s, and it's in that decade that this lightweight fare would have seemed more original and exciting.
Posted by Cary Watson at 1:32 PM