Book Review: The Bastard of Istanbul by Elif Shafak 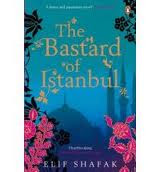 The genocidal slaughter of Armenians by the Turkish government in the period 1915-22 is a historical fact. Few people other than Turkish nationalists and the present Turkish government would argue with this. That it is little talked about has something to do with its distance in time and also with the desire of many governments to avoid annoying a strategically important Middle Eastern country. Shafak's novel is an attempt to show that this tragic event resonates in the present.  She fails miserably.

Technically, this is a terrible novel. Most of the characters exist only to act as mouthpieces for various points of view. This is particularly true of Amy, the young Armenian-American who goes to Istanbul in search of her roots, and along the way delivers a variety of speeches about the Armenian genocide that may as well have been lifted from newspaper editorials. Just to hammer home her talking points even more, the author has "scenes" set in a cyber chat room that consists of more stilted speechifying. Asya, the bastard of the title, is more symbol than character (more on that later), and secondary characters, such as the Turkish Kazanci sisters and Amy's various Armenian-American relatives, do little more than act in a colourful manner, which generally means forcing various foodstuffs on people. And the plot? There barely is one. Shafak trots out a busload of characters and then gives them little to do, hence we get a lot of parenthetical discussions of folklore, food, and customs, most of it no more insightful or revelatory than the average travel article. And the less said about using a character's imaginary djinn ally to fill in some historical and personal background, the better.

But Shafak's biggest error is her decision to shoehorn in a Symbolic Event which is meant to stand as a reflection of Turkey's denial of what it did to the Armenians.  This event revolves around the mystery of who Asya's father is, and any astute reader should have the mystery solved at the halfway point. It's at that point I wanted to toss the book away because the symbolism was so obvious, so contrived, so clumsily handled, it makes the book feel like it was produced by a committee of creative writing students.

Yes, this novel is a comprehensive disaster, but Elif Shafak is not entirely without talent. She can write with energy and humor, and in the character of Zeliha, Asya's mother, she actually creates someone we want to follow and learn more about. For more current and interesting information on issues surrounding the Armenian  genocide, check out Robert Fisk's columns online at the The Independent.