Book Review: The Sweet and Simple Kind (2006) by Yasmine Gooneratne 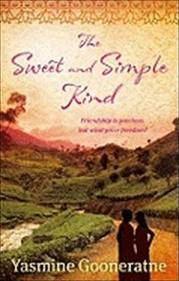 Yasmine Gooneratne is Sri Lankan born and bred, and her native country is the setting for this ambitious novel that details the changes that gripped Sri Lanka (formerly Ceylon) from independence in 1948 to the race riots in 1958 that foreshadowed the civil war that began in 1983.

Gooneratne centres her story around two female cousins, Latha and the rather portentously named Tsunami. The latter is from the rich side of the Wijesinha family, while Latha's family is decidedly middle-class. The two girls become fast friends as young girls at Lucas Falls, a large house and tea plantation owned by Tsunami's father, Rowland. Latha visits Lucas Falls on her vacations and is a witness to what amounts to the moral decline and fall of Tsunami's family over the course of the next dozen or so years.

When we first meet Rowland he's married to Helen, a skilled amateur artist originally from India, and their lifestyle is in most respects that of an upper-class English family. Their taste in literature is Anglocentric, Helen's art is Western, their peers are often Oxbridge educated, cricket is an obsession, and their children attend elite local schools modeled on institutions like Eton and Harrow. In sum, they're almost more English than the English.

Gooneratne depicts Latha and Tsunami's early years at Lucas Falls as a kind of Eden in which the two girls discover a shared love of books and learning. Helen is the muse of this paradise, encouraging the girl's curiosity, discussing art and literature with them, and generally encouraging a liberal way of thinking. The dark cloud in paradise is Rowland, who acts the part of the English gentleman, but soon becomes influenced by the rising tide of Sinhala nationalism that will eventually tear the country apart. Rowland is from an ancient Sinhala family and becomes caught up in politics after Independence in 1948. In what almost seems a symbolic act, he disparages Helen's art, and not long after that Helen leaves Rowland for Mr Goldman, a German rep of tea wholesalers.

The rest of the novel follows Latha and Tsunami as they navigate the difficulties of love and courtship in Ceylon's deeply conservative society, and struggle with life at university. Meanwhile, in the background, Ceylon's post-colonial political life becomes more vicious, culminating in deadly race riots aimed at the Tamil minority. Rowland moves further along the path of Sinhala nationalism and his family becomes as fractured as the country itself, with his two eldest children, Ranil and Tara, becoming as morally vicious as the political conflict.

Gooneratne is a professor of 19th century English literature, with a special interest in Jane Austen, and it shows in her writing, for good and not quite so good. On the plus side, she knows how to spin out a family saga and juggle multiple storylines and characters. This makes the novel very readable, almost addictively so, and her characterization is usually very sharp. The political elements are skillfully interwoven, and even non-Sri Lankans, such as myself, should have no problem understanding the political and cultural makeup of the county.

The only problem I had with the novel (and it's a minor complaint) is its gentility, its cosiness. Gooneratne can be brutally realistic at times, but on a few too many occasions characters and events are bathed in a warm glow of sentimentality and nostalgia. And this also applies to the plot. The middle section of the novel is mostly taken up with Latha and Tsunami's life at university, and too much of it reads like an affectionate, but static, memoir of university life.

The Sweet and Simple Kind is well worth reading, if only for the elegance of Gooteratne's prose. For example, here's a short passage describing the Lucas Falls estate:

When the wreaths of mist lift, leaving the grass wet with dew, mornings on the estate clink and ring with birdsong, sounding very much as if a crowd of children were jingling thin silver coins in their pockets, considering the possibilities.

That sentence could stand on its own as a poem, and writing of that calibre is rare enough that it should be praised at every opportunity.