A Tale of Two Dominiques 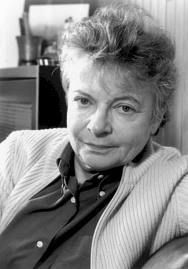 The downcast chap on the left is Dominique Strauss-Kahn, former head of the IMF, and this picture was taken just as he's being told that there's no maid service on Rikers Island. The Dominique on the right is also French, and her crime novels do a lot to expose the political, economic and sexual climate that produces the likes of a Strauss-Kahn.

Manotti is the author of The Lorraine Connection, Rough Trade, Affairs of State, Cop, and Dead Horsemeat. Her novels, which are usually set in the recent past, highlight the corruption and patronage at the upper crustiest levels of French society and business. She does this brilliantly, without being didactic or preachy, and even names names. I don't know anything about French libel laws, but it wouldn't surprise me to learn that she's had angry avocats knocking at her door from time to time.

But Manotti isn't just a one trick pony. Her plotting is complex and layered, and unlike some crime writers who include a political angle to their work, Manotti isn't afraid to also pile on lots of action and sex (gay and straight). Her prose is muscular and, when need be, witty, and like any self-respecting French writer she's always game for a loving description of Paris or food.

Manotti's best work so far is Dead Horsemeat, the second of three novels featuring Inspector Daquin. Daquin is tough, honest, smart, quite willing to bust heads, and also ready to bend, even break, the law to get the job done. He's also openly and enthusiastically gay. In short, he blows all those moody Scandinavian police detectives out of the water.

Dead Horsemeat is about a cocaine smuggling ring that, in part, operates out of a Paris horse racing track and supplies well-heeled customers. There's actually a hell of a lot more plot than that, almost too much, so you'd better pay close attention and not put the book down for more than a day. Manotti keeps the action moving at lightning speed, and one of the highlights is the burning of a horse stable, which leads to the image of horses covered in flames racing through a woods at night. This isn't something Dick Francis' wife would write.

Some readers might not appreciate Manotti's politics (well left of centre), and others might just find her too ballsy and gritty, but right now I can't think of a contemporary crime writer who's her equal. 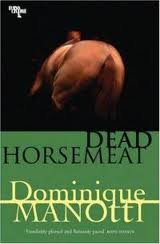 Cop is the novel I cited without naming in the comment on my place. Has it appeared in English translation yet?
================================
Detectives Beyond Borders
"Because Murder Is More Fun Away From Home"
http://www.detectivesbeyondborders.blogspot.com/

Peter,
No, Cop hasn't been translated yet. I check every few months, but no word on it so far.